Søren and Anders of Nohrlund, were serving more cocktails than they  could shake and stir when they were hired as bartenders for live events and festivals. As the love for cocktails have spread through recent years, the boys were often asked whether they would provide similar catering at private parties like weddings and birthday parties. Here the cost per guest was a significant barrier for potential customers.

When volume or cost constraints prohibit you from getting a cocktail bartender for your party, the only other option, until recently, was beer, cider, Breezers or the odd, and common G&T or rum&Coke. There’s a BIG gap between these easy solutions  and a well-mixed cocktail in Anders and Søren’s perspective. And with a gap, there’s a problem worth solving!

Approximately a year ago, they decided to bottle their own original cocktails. It took quite a bit of R&D and hard work in a rented kitchen to get them exactly right for bottling, because their philosophy is: no additives, no taste enhancers, no preservatives (except the alcohol of course…), only locally sourced, fresh ingredients. And obviously, a Nordic touch. Beyond this, they also had to strike the right ABV %, and correct the flavors (when gently pasteurized at low heat, the ingredients change their flavor slightly. Lime, for example, becomes a little sweeter).

They must have known what they were doing. Only three months after they launched, they won – as the first premixed cocktail EVER – a double gold award at the San Fransisco World Spirits Competition for “the red one” (the two others won gold and silver). Should you wonder, double gold means receiving top marks from ALL 42 judges, in a panel including the author of Imbibe, David Wondrich.

For Anders, Søren and Nohrlund the adventure has just begun. The first year was all about keeping their heads above water, trying to get a grip on the industry, it’s players and their core products. Going forward, focus is on further product development and looking beyond the borders of Denmark.

Nohrlund has a clear ambition of defining and owning the bottled cocktails category. We look forward to following the adventure! 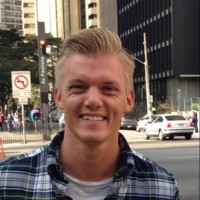