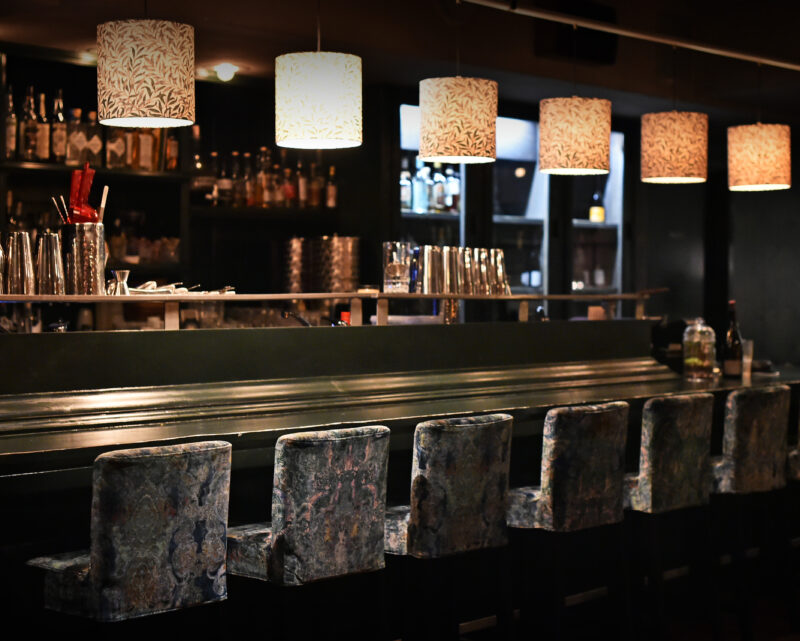 Observe: The last cocktail has been served at 1408 and the bar is closed down.

Hidden away on Wildersgade in Christianshavn, a new cocktail bar is blossoming and is definitely worth seeing and tasting. 1408 resonates senses of local Nordic flavors wrapped in exotic colonial interior, an amalgation of two worlds rarely found in the humble city of Copenhagen. Passing through the doors, you enter into an unusually big and open space. The floor is punctuated with arrangements of soft, colourful furniture. The decor is all-in exotic kitsch with palm trees and blooming flowers fencing the walls. Jungle sounds play in the powder rooms which also have backdrop of flamingos on the walls. This purposely overdone setting both invites your mind to far away places and also, somehow, brings to awareness you’re still in Copenhagen. Much like a tiki bar reminds you of Polynesia with extravagant symbolism rather than recreating the actual thing. At the same time, this exotic colonial version of the Garden of Eden, combined with a soulful playlist creates a rather sexy atmosphere for a first date. While still being a novice in the scene, the bar has a solid backing of its sister bars 1105 and 1656 headed by co-owner Morten Damgaard – who has over 10 years experience as a bar entrepreneur. 1408 joined the family in May 2018. Right from the start, it was obvious that 1408 would be a different venture compared to its siblings. It shares a kitchen with the reknowned Michelin star restaurant Kadeau, which builds its menus on ingredients foraged from the Danish Island Bornholm. This gives 1408 bartenders access to funky locally-sourced ingredients such as fermented honey, hay-infused cream and yogurt whey. With such resources at hand, and a back bar packed with locally produced spirits, the cocktail menu explores the length and breadth of Nordic flavors. Often citrus will be substituted for local acidic alternatives like green apples, unripe strawberries, redcurrant, rhubarb and gooseberries. 1408 presents classic cocktails with a Danish twist – well represented in their signature cocktails “Bay Leaf Gin Sour” and “In Martini Non Veritas”.

Christianshavn is flourishing with new and high quality restaurants and 1408 is certainly benefitting from the floods of visitors in this neighbourhood who decide to drop in for a cocktail or two before/after meals.

Playing on a wide spectrum and tantalizing your tastebuds from wildly exotic to locally Nordic, 1408 is more than meets the eye. To get under the hood and see what’s going on, you need to come closer… the door is open!