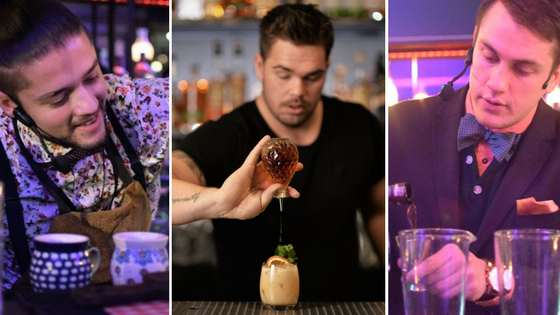 Nicklas Jørgensen from Copenhagen’s new cocktail bar Helium won the recent Danish finals for the Diplomático World Tournament. We have talked to Nicklas, Rolf and Damiano who ranked as top 3 in the competition to learn more about why bartenders compete and how they prepare for competitions (all photos in this article are kindly provided by Rasmus Madsen and the industry blog Bag om Baren).

On wednesday the 18th of January 11 Copenhagen based bartenders were competing for the title and a chance to compete against bartenders from more than 45 countries in Venezuela in May. In Venezuela six global finalists will be found who will compete for the Grand Prize of $10.000 in London.

The Danish tournament featured two rounds. For round one, the competitors were asked to present a cocktail that they submitted in an online form using a Diplomatico product. An panel of experienced judges evaluated the presented drinks and the six best participants was challenged to present a new cocktail made with the new Diplomático Manutano Rum. For Nicklas competing is a chance to better himself and force some creativity to happen somewhere in the process. He prepared for the competition simply by tasting the rums for a coulpe of days and then went with the flow from there.

What did you consider in relation to working with rum for this competition?

Nicklas: With a good base of knowledge for rums in general and having met the Master blender of Diplomatico, just took small things that he said and what i already knew – keeping the rum the center of the drink is vital, so taking things that amplifies the tastes that I get, from the rum itself, or works well in junction with the “diplomat” at hand.

What does it mean for you and the bar that you won the Danish finals of the Diplomatico competition?

Nicklas: It’s an honour being named winner of this competition. I didn’t see it coming – in fact I was in the other room when they announced the rankings, since I’d written it off and wanted a Kiwi Meat Pie… But none the less, it means a lot, both for HELIUM and for me.

Do you have some advice for other bartenders who are eager to compete in cocktail competitions?

Nicklas: I’m NOT really the one to ask, i kinda have my own way of doing things and my way is relatively simple – so KISS (Keep it simple, stupid) and less is often more… but listen to your peers, do some brand research if needed or ask an adult nearby.

Nicklas won with the following cocktails: Stirred served on ice in a rocks glass or served up, either way it’s finished with a grapefruit zest. Build in a highball with icecubes, pour the smallest ingredient first and stir well. Garnish with a dehydrated lime wheel and a big sprig of mint.

The 2nd and 3rd place was won by Rolf Bender from Oak Room and Damiani Pezzi from Curfew who both have strong opinions about what competitions are all about.

Rolf won the title of being Denmark’s best bartender in 2015 and he competes because he believes it helps him become a better bartender by pushing him out of his comfort zone. We asked him what it takes to win a cocktail competition and what’s in it for the bartenders: Rolf: First off, you obviously need a good cocktail. As you compete you get priceless feedback from judges who have a lot of experience –  often international experience. Furthermore, you get better at presenting in front of large crowds, which helps you do your everyday job behind the bar, as you have to present cocktails to many guests.

A good presentation should be backed up by a good story: Why this specific cocktail? This is always good to think about when making new cocktails for a bar menu. A good presentation can be made in a couple of different ways. I prefer a good logic of why certain aspects/ingredients of the cocktail make sense. I usually don’t come up with crazy stories as I don’t think it is relevant, but everyone has a different opinion about what a good presentation is.

I think cocktail competitions are good for the industry in general. The large competitions like Bacardi Legacy, World Class, Beefeater Mixldn and Diplomatico World Tournament are gaining momentum. This helps put an increased focus on bartending from the “mainstream” media, hence to the broader audience which will influence people to go to the bars they hear about. This means we, as bartenders, in the end will have more guests at our bars and it can make people focus more on quality. Dry shake all ingredients except the champagne, shake with ice and serve in a rock glass. Top with champagne and Apricot Brandy Foam**

** Apricot Brandy Foam: Add 30 cl. of egg whites, with 20 cl. sugar syrup, 5 cl. Apricot Brandy and 3 cl. of Lime juice. Add all ingredients to a syphon and charge twice with a cream charger

Rolf: Sustainability was a buzz word in the industry in 2016 and I believe zero-waste cocktails will become a trend in 2017. With the Sustainable Diplomat I wanted to make a cocktail with egg yolks as we throw out quite a lot of them at Oak Room. Damiano: “Contadino” it’s a tribute to my family, that for over a century has been working in a farm. I took inspiration from the afternoon family gathering typical snack: Fresh goat cheese, figs jam, honey and walnuts. The cocktail is a real snack with lots of nutrition!

I compete in cocktail competitions because I believe it’s the fastest and most interesting way to learn. Competing improves your skills, enlarge your knowledge and network. It lets you travel and get in contact with different new realities, challenges you to give 110% of yourself and train your creativity!

Working with Rum is always a pleasant challenge for me. Generally talking, rum lets me play with “Kitchen” ingredients. The sweetness, fruitiness and versatility of rum makes it possible to try unusual wonderful “Food cocktails”, which are my passion.

I’m proud to be in the top three, especially considering the big fish that joined the competition. I am very grateful to everyone who showed me support and helped me grow a lot recently. I hope to payback their patience with an even better result soon!

Congratulations to all the winners and in particular Nicklas who will be representing Denmark in Venezuela in May!

Interested in cocktail competitions and what it takes to win? Read about our Danish contestant for the Bacardi Legacy global finals, Scandinavia’s best Linie Aquavit cocktail that won the Nordic “Linie competition” or the Danish representative for the global finals of the gin competition “Beefeater Mixldn”. And sign up for our monthly newsletter to have news about future competitions delivered straight to your inbox. About Diplomático Rum (website)
Diplomático is a premium rum brand from Venezuela. Located at the foot of the Andes Mountains, the Diplomático Distillery (producing spirits since 1959) combines traditional methods with modern technology to produce its rums. The area boasts great conditions for sugar cane and rum production including fertile lands, abundant water and favorable weather. The product range consists of the Tradition Line: Planas (aged up to 6 years), Mantuano (aged up to 8 years) and Exclusiva (aged up to 12 years), and the Prestige Line: Single Vintage and Ambassador, both are aged 12 years and finished in sherry casks for one and two years respectively. Diplomático’s Reserva Exclusiva, recently received a Double Gold Medal at the San Francisco World Spirits Competition.