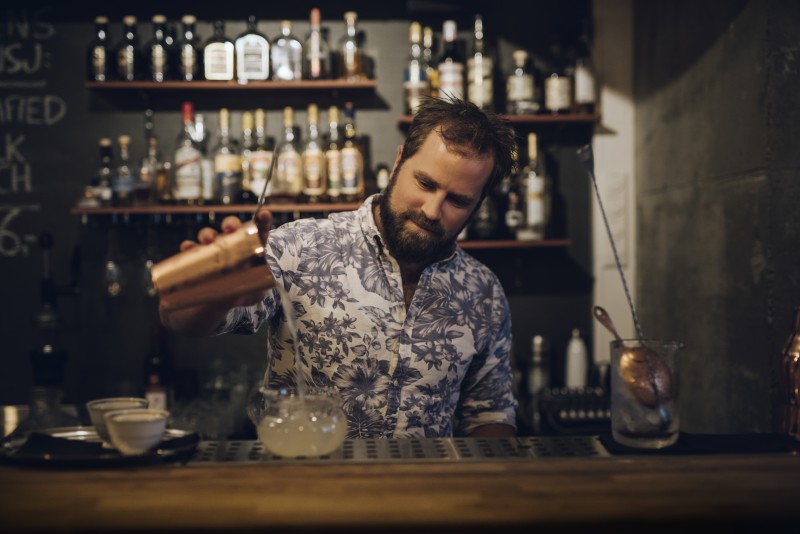 A new face to aquavit

After finishing a bachelor’s degree in petroleum engineering Truls fell in love with bartending.

In May 2017 he opened his own bar Pjolter & Punsj where the focus is Scandinavian drinking culture. Naturally quite a few of the drinks on the menu are based on aquavit.

We have asked Truls a few questions to explore which place aquavit has in the contemporary Norwegian cocktail bar (download our free ebook on aquavit cocktails for more inspiraiton):

What’s your personal history with aquavit? My first aquavit was served at Christmas dinner with my family. I’ve always been fond of aquavit, but from my youth till my early 20s it was always associated with the Christmas season. As I grew older I’ve come to enjoy and understand aquavit in a whole other way. Today I love a nice aquavit next to my beer in the summer, or mixed with tonic.

Which place does aquavit have in the Contemporary Scandinavian bar in your opinion?

Aquavit is very new in cocktails compared to other spirits, and it’s only during the last 5 years that it has really starting to become one of the most exciting spirits to work with in a cocktail bar. Today we see almost every cocktail bar in Scandinavia having at least one aquavit cocktail on the menu, and I do believe that it’s there to stay. There are no proper classic cocktails made with aquavit, so I think that we are now shaping the foundation of aquavit cocktails.

How do you work with aquavit in cocktails at Pjolter & Punsj?

Aquavit can be a very complex spirit to work with. Although it is similar to gin in some ways, it can often be much harder to work with in a cocktail. But if you get it right you will also get a more complex drink.

For our first menu at Pjolter & Punsj our main objective has been to give aquavit a new face to the average Joe. We focused on punches and collins’, to show people that aquavit can be enjoyed in light and refreshing drinks. We do of course also have a few more powerfull cocktails for those who really want to try the potential that aquavit holds.

Which three aquavits would you recommend your guests to try?

My favorite aquavit really depends on the season, but usually I would go for a Løiten Sommer Aquavit during summer and Gammel Opland Edel Portvin during the winter.

If I were to introduce three different aquavit to my guests I think I would go for Aalborg Taffel, Atlungstad Mandelpotet Aquavit, and Gilde Non Plus Ultra.

Can you share a couple of aquavit cocktails with us that you serve at the bar?

One of the first Aquavit cocktails I created a couple of years ago for The Linie Award’s competition was “Back to the Roots”. We’ve changed the recipe a bit since then, but it is a cocktail that has stuck with me ever since I started working with Aquavit. I like this Cocktail a lot, because it really shows how aquavit stands up to bold flavors like beetroot, cardamom and peaty whiskey. Back to the Roots

Shake all ingredients and serve in a cocktail glass. Garnish with orange zest.

*Juice fresh beetroots, and mix eaqual parts beetroot juice and sugar in a saucepan. Bring to a boil and then chill. You might enjoy these aquavit cocktails best accompanied by the classic Swedish akvavit song “Helan Går”:

If you are intrigued by the use of aquavit in cocktails you might enjoy our free e-book on aquavit cocktails.