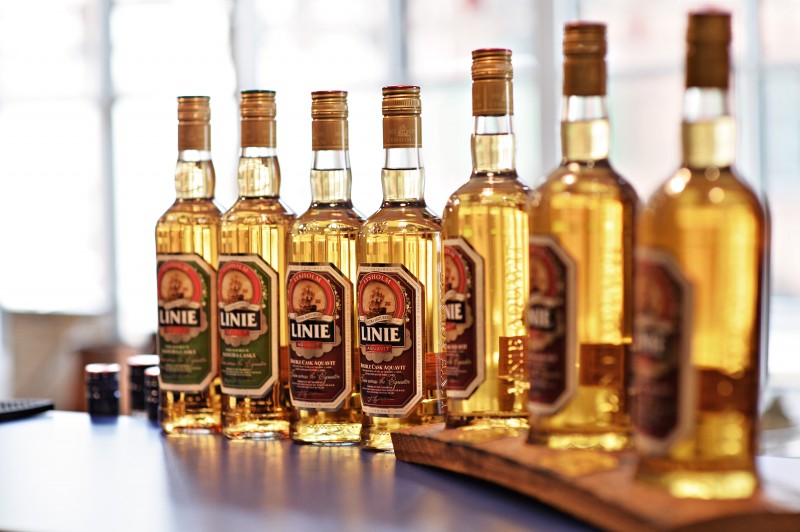 If you ask any Scandinavian of a younger generation, they are not likely to consider aquavit desirable. It’s simply not cool! And it makes you ridiculously drunk! They are more likely to think it related to elderly people or Uncle Thorvald dropping his pants before the starter is served. Well, we’re here to tell you that YOU’RE DOING IT WRONG! Don’t drink it ice cold. Don’t shoot it down. And please, don’t drink half a bottle during the herring serving! If you go about it differently, a new world of taste experiences awaits!

If you ask Americans for instance, they find the spirit exotic and emphasize aromatic notes like citrus, pepper and passion fruit. This might sound strange to Scandinavians, but it actually makes sense, and is also the reason why aquavit is such a great cocktail ingredient. So great in fact that we’ve decided to publish a full e-book on aquavit cocktails which you can download here. If you’re still not convinced that you want to take that 3-click effort, let’s put aquavit into context and tell you why you need to care!

Aquavit is the spirit of Scandinavia. But it is as diverse as the countries and regions it’s from. The unique flavor profile of each type of aquavit is determined by centuries of drinking and eating cultures, alcohol production history and not least by the herbs and spices grown in the particular region where the aquavit originates. Thus, it’s not only the flavour profile of the category, but also the opportunity to tell a story that makes it a particularly interesting category for bartenders and cocktail enthusiasts to explore. A good example of these stories were displayed at the recent Linie cocktail competition, which we covered on the blog.

More stories on the category include why the Norwegian’s mature their aquavit while the Swedes like it with more floral notes and lower ABV and the Danes want it strong and simple. It’s even known to be the cause of death for at least one Danish king! We’re covering this and much more in our ebook on the topic, which is a good place to continue exploring what the category has to offer!

We’re happy to see that aquavit is increasingly being used in cocktails internationally. But are also aware that innovation is needed to bring aquavit into the new millennium in Scandinavia and overcome the younger generations’ aversions towards the category. Luckily a lot of Scandinavian bartenders have seen the potential that aquavit holds, and are loudly arguing that we owe it to our cultural heritage to reinvent uses for aquavit in the contemporary bar. As Scandinavian restaurants explore new uses for local ingredients why shouldn’t bars explore new uses for aquavit?

Internationally, aquavit is often used like a spice – for example by adding a barspoon or rinsing the glass in the spirit to accentuate particular flavors. In Denmark, aquavit is now increasingly used as the base spirit in cocktails. The complexity of caraway and dill in aquavit provides a gin like quality. Compared to gin however, aquavit has a more immediate and direct flavor profile given the simplicity of the caraway and/or dill distillate compared to the many herbs and spices in a gin. This also makes aquavit a very “honest” product in the sense that it will make you aware of its presence in a drink rather than blending in with the other ingredients undetected.

In relation to cocktails, it is good to know in what context and with which flavors you mix an alcohol this distinct. For that purpose, Nick Kobbernagel Hovind from Ruby and Rasmus Poulsgaard from Duck and Cover have created a very useful “flavor-tree” for aquavit which you also find in the aquavit e-book. If you’re looking to explore aquavit cocktails (and you should), this is really a must-have companion for exploring aroma synergies and possible flavor combinations.

If you want to start with already tested and tried variations, we have recently featured several interesting aquavit cocktails on the blog, that you can try on your own, including Nordic Mule, Amber & Wine, Green Old Fashioned and Jubilee Sour among others.

Interest is picking up and aquavit is making its way to the contemporary bar much like we have seen it with tequila within the past 4-5 years, and gin for a little longer. We’re already seeing ambitious independent aquavit producers giving their contribution to a 21st century aquavit, and we look forward to seeing where this trend takes us. One thing’s certain: we can expect a lot of unique aquavit cocktails popping up on cocktail menus of ambitious bars around the world in the years to come. So the next time you’re out for drinks ask for one and help make aquavit cool again!

This feature article is an appetizer for our ebook on aquavit. Download it for more in depth information on aquavit and many more examples of how you can use it in cocktails. If our e-book and this feature hasn’t convinced you to try aquavit again, try listening to Sune Urth’s Ted Talk “How to educate your brain with alcohol”).