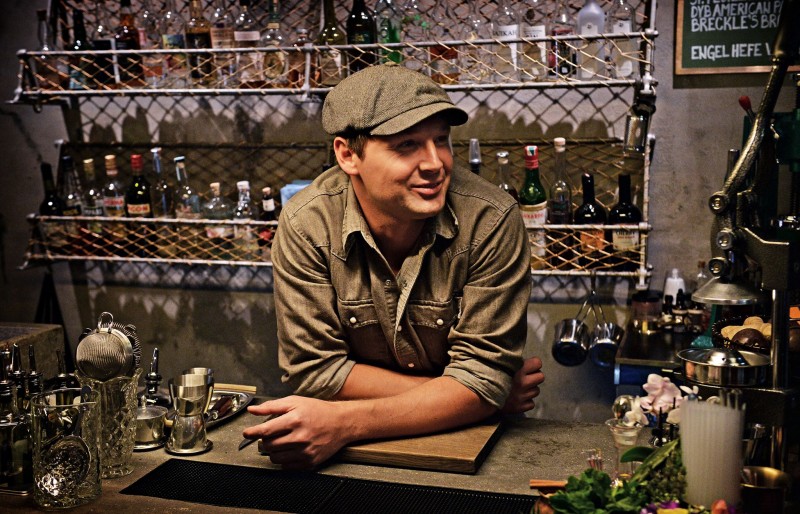 Passionate opinions and a block of ice

Anže is a bartender with passion and strong opinions – and those two are the driving forces behind him opening Atze Peng – your Vesterbro neighbourhood bar whose name translates roughly into “Old Homie” (in old, East Berlin slag). Anže wanted to set his own direction for a bar, to be able to continously expand his horizons in the trade and to test ideas that would not fit into any of the other bars in Copenhagen. Anže truly believes – and lives – that a bar which feels like home is created from the roots up, with clear direction and involvement from the owner, himself. That is why you will always find himself behind the bar at Atze Peng.

A native of Slovenia, Anže has travelled the world with his passion, including stints in Ibiza, Australia, Rotterdam and Berlin before he finally settled in Copenhagen. The time in Ibiza tested his integrity – after seeing how high-street bars and clubs would wash ice for re-use, and re-serve half-finished beers, he was quick to leave that scene and find himself something better in the more down-to-earth, high-quality bars on the island. Interestingly – this was not the first time ice would play a role in his decisions for the future. Reading the magazine Australian Bartender during a prolonged stay Down Under sparked his interest in fresh fruits, fruitjucies and syrups. Teaching bartending skills to new bartenders in Rotterdam got him ready for managing the bar at the posh 5-star hotel Hotel de Rome in Berlin. While living in Berlin, ice would reappear as a theme. Not having given much thought to this before, a friend of his owned and operated an “ice factory” just outside Berlin. This guy produced crystal clear ice, and it was not long before Anže was the distributor of this ice to the Berlin craft cocktail scene – earning a little extra on the side, while fuelling his passion for craft cocktails.

A passion for cocktails and electronic music may be what drove Anže to Berlin, however it would be love that brought him to Copenhagen approximately four years ago. Not the love of cocktails, that is – but the love of a woman, of course. And while Anže may complain that women in Copenhagen don’t flirt – even when drunk – it was still a Danish woman he fell for! Anže quickly made friends with the bartenders around Copenhagen, many of whom he describes as his best friends today. With this base, and with the cocktail scene of Copenhagen bustling, the opportunities for a talented bartender to get a good job at a known and well-established bar in Copenhagen were abound.

Anže however felt driven to build a bar from scratch himself. A bar that would continously evolve, and where he could test his ideas and hone his skills without approval or argument. And perhpas most importantly, a bar that he could shape into a place for regulars, where you can exchange small-talk and honest opinions, a bar that feels like home. And thus, two years ago, he found the space where you find him today. Here he has continued his passion for fresh fruits, an open and friendly atmosphere, and last but not least – his love for ice. The enormous, large block of ice sitting on the bar desk is homemade, as Anže had a brief argument with the local ice purveyor. As a man of integrity and opinions, he quickly decided that he did not want to do business with this guy any longer, and now makes large blocks of crystal clear ice in the basement below the bar. When asked if he had ever considered getting one of those instruments that make perfect spheres out of ice blocks, he sniffs through a friendly smile and says that he prefers to make the spheres, by hand, as the customer orders his drink.

So the next time you’re around Vesterbro, stop by Atze Peng, order a “Nissefar”, enjoy the work invested in shaping your personal sphere of ice and have a chat with Anže. After this, you will probably join his crowd of loyal regulars that stop by on Wednesdays and enjoy original cocktails for “en halv hund”.