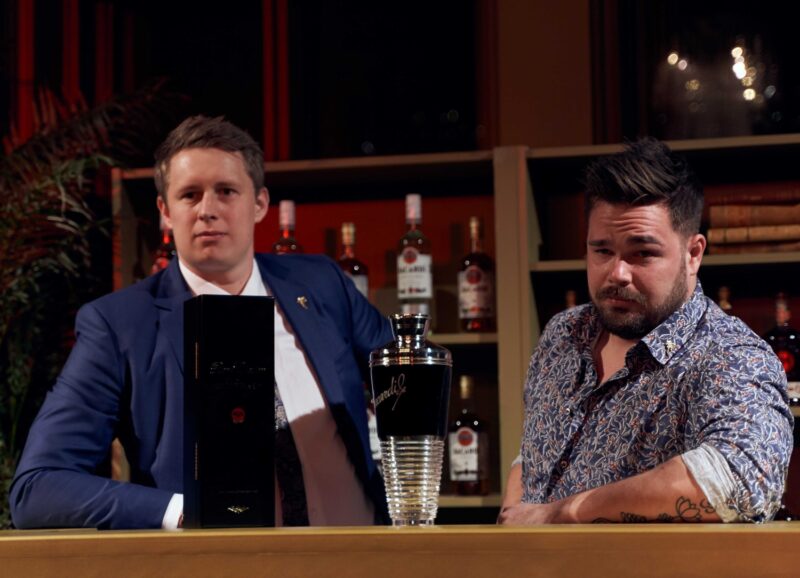 ‘The Tank’ takes it all.

The quest to finding Denmark’s best Bacardi rum cocktail is over. At yesterday’s Bacardi Legacy Nordic Finals in Stockholm, Nicklas Jørgensen, co-author of “Bartenderens Cocktails” (Eng: The Bartender’s Cocktails”), took home the legacy award with his stir and strain cocktail “La Luna”. The cocktail is named after his daughter, making “fatherhood” the main theme for his legacy.

Four trios from each of the Nordic countries presented their drinks and marketing efforts to a panel of carefully selected judges. The old National Archives building provided a ceremonial backdrop to the competition that ended with four contestant winning a spot in the global Bacardi Legacy finals in Amsterdam next month. Tensions rose high as contestants from each country went up, one after the other, to present their Bacardi Legacy cocktail to the judges and a crowd of curious bartenders. Families and friends from around the globe followed the action on Cocktail of Copenhagen’s Instagram LIVE video and sent their messages of encouragement via the comments. The stakes were high and nerves were in the air – when Caroline Sørensen Skaget from Norway stopped and paused to breathe, everyone present in the room took a deep breath with her. Each contestant had carefully analysed and reinterpreted the meaning of legacy. Sweden’s Micke Karlsson’s message about leaving a more open and welcoming bartender legacy for the future generations, and Caroline Sørensen Skaget wearing full traditional Trondheim dress-wear, were a few of manu testimonies to the months of creative development and personal soul-searching the bartenders have gone through. More serious aspects of the industry were also brought to the light, with Norway’s Julian Brady dedicating his cocktail to mental health awareness.

All the drinks showed a high level of skill and understanding of flavour among today’s bartenders. “I judged the competition a few years back, and I remember 80% of the cocktails being bad,” says Kirsten Holm, the Danish quarter of the judging panel.”I thought the level of technique was quite high [today], I was surprised.” Rossie Mathias won the right to represent Finland with his cocktail “Rubí”, an ode to the importance of art in our lives. From Norway, Tomas Ricciardi will be traveling to Amsterdam with his drink “El Bohemio”, which represents his Czech background. And from the host-country Sweden, Penny & Bill bartender Oskar Drigoris took home the trophy with his sustainability cocktail. A roar rose up through the old columns from local supporters and friends of the Stockholm bar scene.

“Save the Legacy” by Oscar Drigoris
(Sweden)

Stir and strain, and garnish with a dried apple wheel and mist of Chai Tea.

Following the national finals, all competitors spent three months promoting their drinks around the world. Some ventured on an international tour, others did various takeovers, events, and articles. Sweden’s winner Oskar Drigoris even went so far as to have his cocktail tattooed on his arm. Yet, although the marketing efforts play an essential role in the competition, it still only made up for a small percentage of the final decision. The same rules will apply in the global final in Amsterdam. “Abroad there are some very, very competent bartenders,” says Kirsten. “But overall it still comes down to the cocktail tasting good. That is the most difficult task.”

In the end, four bartenders succeeded in passing on their legacy. We are already looking forward to seeing how will these drinks stand up to the creations from all over the world. Until the Global Final, we will take a closer look at some of the competitors and their cocktails so don’t forget to follow us and your personal Legacy favorite on the way to the grand finale.