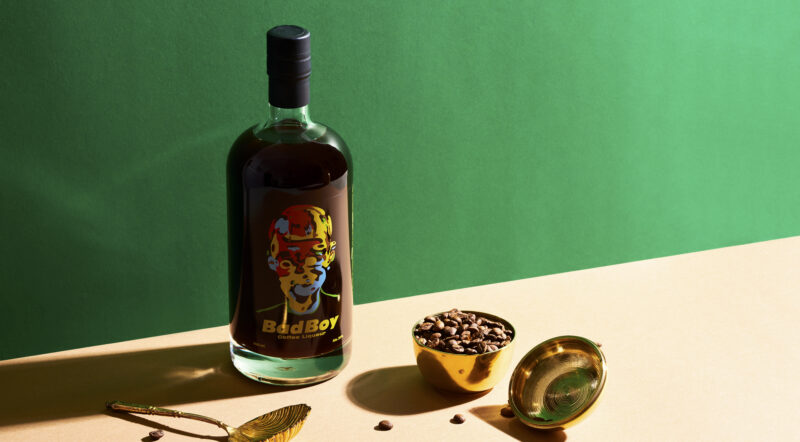 How One Bad Boy is Changing Our Taste for Coffee

The Copenhagen startup you should keep an eye out for

Since it launched in August 2019, BadBoy Coffee Liqueur’s pop-art label has slowly started emerging on the shelves of Copenhagen’s cocktail bars. Balderdash recently included it in its Copenhagen Coffee Festival menu special, and as of this month, high-end supermarket chain Irma is stocking it as part of its #TænkSmåt campaign supporting small, local businesses. That’s a lot of hype for a coffee liqueur, you might say. We thought the same. And so we decided to find out why.

It’s an early Spring day in Copenhagen as we sit down with Jens Lund, founder of Bad Company and creator of BadBoy Coffee Liqueur, in his small basement space in Vesterbro. If Andy Warhol had married a Dane and moved to Copenhagen, their apartment might look somewhat similar. Bright colours contrast the white walls and a 1980s arcade machine sits across from the entrance, teasing you to come over and give it a go.

You initially think that BadBoy is all fun and games. The name surely resonates with a sense of party and promiscuity, much like the ‘wake me up and fuck me up’ story of the original Espresso Martini. But just like Dick Bradsell never compromised on quality in his innovations, with BadBoy, Jens has created a refined ode to his bartender and barista background. As he spills the beans on his liqueur, the pieces start coming together. “Coffee is like wine,” he says. “The magic happens by figuring out how to treat it right.”

BadBoy is a cold brew coffee liqueur that – get this – actually tastes like coffee. And if that’s enough reason for you, by all means, close this page and go grab yourself a bottle. Otherwise, keep on reading.

Coffee has been gaining an ever-stronger presence in the bar scene. From cold brew to coffee grinds, beans infusions and air-press, the bartender’s favourite pick-me-up has finally received its rightful spot in the cocktail pantry. In fact, last year, Bar Convent Berlin decided to dedicate an entire exhibition area solely to the use and knowledge of coffee. “I have a massive love for the bar industry because I’ve been in it myself,” says Jens. This is also why he has chosen to place his distillery in Vesterbro, an expensive area to live in let alone create a startup business. “I could save the rent, but then I wouldn’t be close to the industry,” says Jens.

It’s not so many years since terms like “craft” and “artisanal” started overly diluting the distillation industry. Jens recalls seeing numerous new spirits pop up, but somehow everyone had given up on challenging Kaluha’s claim to the coffee liqueur throne. “I saw a hole in the market and thought ‘this is it!’. And so I decided to jump in,” says Jens

Since then, Jens has built BadCompany by himself, from balancing the flavour to creating a brand. With coffee as well as design, nothing about BadBoy has been left to chance. “I purposely designed it completely different from other coffee liqueur brands,” says Jens. “It’s edgy and easy to remember, and if it offends people a bit, even better.” From the beginning, the task was to create a fun brand reflective of his own personality, without compromising on quality.

As a former barista for CUB (Copenhagen Underground Brewers), it’s safe to say that Jens knows his beans. Still, the process of finding the right ones hasn’t been any easier. Testing between 80 and 100 different prototypes, Jens is now using a mix between Columbia and Brazil. “I wanted to challenge coffee drinkers,” Jens explains. “If you think about it, it’s funny how people don’t actually associate coffee liqueur with coffee.” The Columbian beans provide body, fullness and classic coffee familiarity. But it’s the use of Brazil that sets the sensation apart, with lighter notes like citrus and blackcurrant.

Jens also grinds the beans himself to ensure consistency. “There’s a fine balance between a nicely bitter tasting coffee and a rancid one,” he explains. “Coffee is a really delicate product, you have to tune in on it, and of course adjust the coffee to water ratio.” For Jens, the aim is to create as clean a product as possible. One which is flexible and enticing enough for the bartender to play around with, yet still approachable for the average consumer to tuck in the basket.

Before Bad Company, Jens was helping to set up WOLT, going from door to door to sell a concept no-one understood yet. “That drive you get when you are creating something yourself and you realise that you can have an influence, took a hold of me,” says Jens.

Jens admits that he has spent a great deal of his life roaming around from industry to industry and starting one education from another before eventually completing a BA in Entrepreneurship. As such, it is all the more impressive that he has managed to incorporate all of his experiences in one brand that is 100% his own. “Your passion and what you want should reflect in the products because people can sense what lies behind a brand,” says Jens. “I wanted to test myself and prove that I had the power to make something. And that something is BadBoy.”

In fact, BadBoy is Jens; from the bartender and barista to the world-travelled globetrotter with a bit too much energy and creativity stored away. It is also literally him on the bottle, in a pop-artsy self-portrait. On a rainy day as a little boy, Jens’ mother told him to go play in the rain to end his boredom. Jens decided to do so in speedo and googles and with a big grin on his face. “That’s the story behind BadBoy,” says Jens. “The inner child taking a chance and daring to be his own fun and unruly self.”

In the backroom of the Vesterbro basement, coffee and orange infusions rest in big buckets, waiting to be bottled into BadBoy Coffee and the recently launched BadDog Orange liqueur, named after Jens’ old German Shepherd. Minimising waste is also a big part of Bad Company, from reusing coffee grinds to make beauty scrubs, to cooperating with juice companies on recycling orange skins for the Bad Dog liqueur. “I’ve always had many creative ideas and concepts I wanted to try out,” says Jens, admitting that he has had his fingers burnt more than a few times.

Jens’ endeavour to create Bad Company is a golden example of why Copenhagen is heaven to aspiring distillers and spirit dreamers. With a bustling food scene and thriving startup ecosystem, Copenhagen provides the perfect conditions for turning any boyhood dream into a money-making franchise. But, no pain, no gain. As Jens puts, if you want to tap into all that Copenhagen has to offer, it’s really quite simple: “Fail early, fail fast, and fail often. And always fail forward.”