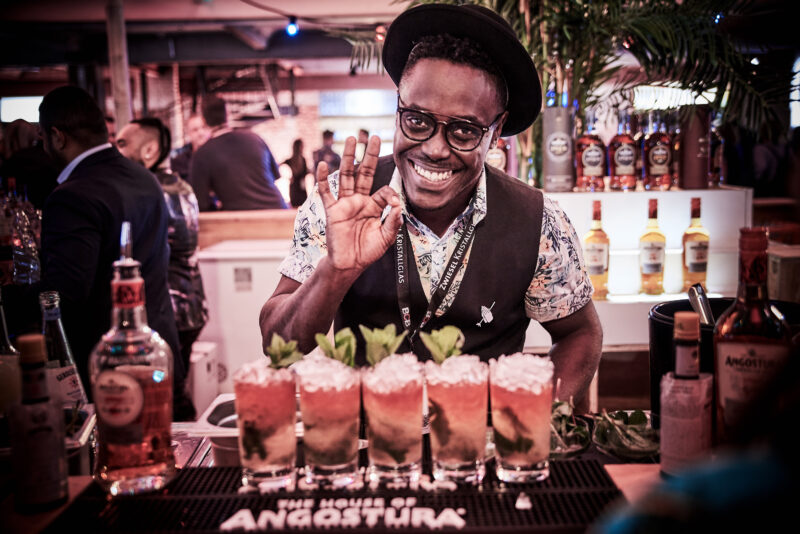 Between the Old and the New

It is like waking up on a Sunday morning, hungover, with blurry but definitely good memories of the past night. Our favourite brands are coming out with new products, while bartenders themselves are lending their names to exciting projects. Both our livers and minds are still blue for what went down in Berlin a month ago, so here is a short recap of what incapacitated us for almost a month.

On Wednesday, we deployed a specialized one-man-team to scout out some exciting new products that caught our attention before the convention. With 1400 brands at the tips of our fingers, there was a lot of tastings to do. Here is a showdown of the most exciting products we’ve been exposed to.

There might be a slight Czech bias to kick this off but hear this life advice. Whenever you have a chance to encounter Alex Kratena, you should do it. Exposure to one of the most influential bartenders in the world is addictive. I fell in love with his methods after the chance to visit his London Bar, Tayēr + Elementary, arose during P(our) Symposium. He recently revealed a couple of exciting projects that he’s been working on and at BCB we got to taste two of them.

Paragon is a series of cordials highlighting the use of peppercorns in cocktails. With extremely low pH levels and about 55 degrees Brix (sugar content), the cordial is much more friendly to cocktails than what you remember from the late nineties. It’s like a swiss knife on the back bar. You don’t need three ingredients for spicy, sweet and sour notes – one bottle provides it with all. But for Paragon, three is the magic number, and even in the process of extracting flavour, CO2, infusion and alcoholate were all put to use to maximize the final result.

Most bars have not yet experimented with peppercorns, so it was exciting to see three easy to understand products that will speak to almost any bartender. My favourite was the Timur Berry from Nepal with a distinct sharpness, fiercely fighting the extreme acidity. But the other two peppers – Rue Berries from Ethiopia and White Penja from Cameroon, were not far behind and they all put a classic Gimlet on its head.

But most of the time, Alex was to be found at his own stand inside the De Kuyper lounge, where he presented Muyu, a range of liqueurs he developed together with his partners in crime, Monica Berg, and Simone Caporale. Devoted attention to highlighting a single ingredient that, once again, is not very prevalent in most bars brought a lot of instant inspiration. It is really easy to bridge the barrier between reality and the unknown when you start drinking a cocktail you are familiar with and then you are hit with something that is pleasant but previously unknown to your palate. The liqueurs come in three varieties – Vetiver, Jasmine and Chinotto (bitter citrus fruit), and a smile creep onto your face as you slowly discover what you were, in fact, tasting all along.

Also in the De Kuyper area, I got the chance to taste a new chocolate liqueur backed by German bar-entrepreneur Joerg Meyer. His promotion of a liqueur which promised a whole new experience of the 20th Century Cocktails and Gin/Brandy Alexanders was an invitation I couldn’t refuse. During an impromptu private presentation, he focused on explaining the importance of high-quality raw materials.

What separates Dutch Cacao from the rest are carefully sourced cacao beans, vanilla and cinnamon, all backed up by delicious arrack, requiring only a little bit of sugar to round things off. I enjoyed not one, but two serves on ice, something I would usually never do with a liqueur. But this double-up was worth breaking the rules.

While visiting London, it also appeared to me that the range of coffee liqueurs used in the bar is expanding exponentially. The established brands are coming out with new expressions and new brands are bringing forward the exciting stuff. One of the newer ones is Mr Black. In less than two years, it has already rooted itself all over London, thanks to their frontman, the celebrated Sydney-based, Slovakian bartender Martin Hudak.

At their stand, I had the pleasure to taste both their original coffee liqueur and a new amaro, which brought a nice comparison to the mix. Mr Black uses a cold brew coffee as the base, which brings forward much more acidity and darker flavours than its competitors. It also creates a lighter body, which doesn’t overpower other ingredients in cocktails, making it the perfect tool in the hands of any Espresso Martini craftsman.

The amaro boasted a similar freshness but its body was fuller and obviously, more bitter. A lazy comparison would be “a coffee focused Averna”, but to be fair, it was an amaro that I immediately wanted to take home with me to drink on ice until the end of my days. The ultimate journey to the comfort zone – after all, coffee fuels most of us.

While most bartenders and whisky aficionados will scoff at Jack’s traditional No.7, many come to agree that the higher range of Jack Daniel’s deserves recognition. Now it’s time for a small earthquake. For a couple of months, an unusual bottle started to occupy shelf spaces in airports I’ve visited. Upon closer inspection, I discovered that Jack Daniel’s is coming out with their own Rye. And at BCB both their Straight Rye (looking similar to the classic No. 7 bottle) and a Single Barrel were available for tasting.

While there was not much separating the Single Barrel from the Straight, besides a hefty price tag, what Jack Daniel’s might bring to the Danish market very soon is a good competitor for Rittenhouse, a previously undefeated champ of mid-range rye whiskey. Crispy and savoury notes are in dominance, supported by a healthy dose of corn sweetness. If the current prices stick and Jack Daniel’s Straight Rye will arrive at the market at 80% of the price of Rittenhouse, something might change in the bar cabinet.

Enough with booze, it’s also time to give our kidneys a break. You might remember that earlier this year we were in awe over a “Boozeless Negroni” utilising some black magic and a bottle of Seedlip. The creators of this British non-alcoholic spirit hit it off and already launched their second alcohol-free venture – Æcorn Aperitifs. The range consists of a Dry, Bitter and Aromatic aperitif – which might be distantly compared to dry vermouth, light amaro and sweet vermouth respectively.

I will always be overly excited about drinking when we are not drinking. Before the release of Æcorn, you we’re relegated to making your now alcohol-free amaro or vermouth at home. The process was very far away from easy, quite the opposite of what drinking Seedlip should be. Now, with these three releases, the Nogroni, Martino or Æcorn Adonis are just a single pour and an ice cube away.

BCB is like a thunderstorm that slowly develops before exploding into electricity and lightning. In the early hours of the day, fresh coffee is poured, chit chatter can be heard and the stage talks take place without interruption. As the day progresses, the nightwalkers come out and the crowds gather. Yet, with so much free booze and so many industry people in one place, the BCB is strangely calm, collected and highly professional. It’s a networking, showcasing and celebration all at once – and the best example of the wonderful industry that is hospitality.

A stand that single-handedly dismantled the visions of a somewhat sober BCB. The plan was solid – take a slow walk around the massive venue of Station Berlin, find out where the good things are, and enjoy them in the second half of the day. But after an unexpected “holy cow, is that Jeffrey Morgenthaler!?”, the next half an hour was spent by fangirling, talking about the bar-scene in Portland, modern bartending (about which Jeffrey had a presentation right after our chat) and, of course, Negroni Sbagliattos.

The Campari HQ started off a boozeful journey through the venue and we later rejoined them for a nice dram of Wild Turkey 101 Rye, Morgenthaler’s Barrel Aged Negroni and yet another Sbagliatto. The Campari stand presented an obvious excuse for missing out on exploring Berlin’s bar scene. We’ve drunk the world with these fabulous Italians and I wouldn’t have it any other way. Here is a heartfelt thank you, the hangover was very worth it.

Lyaness Bar Built an Escape From the Hustle and Bustle

After getting lost a few times, we managed to locate the reconstruction of Lyaness, tugged away in between the Rum House and main halls. An almost perfect replica of the original London bar from the geometrical mirror to the dimness of the light created a wondrous escape from the mayhem of the main halls. As magnificent as BCB is, once in a while all you really want is a high chair by the bar.

When Lyaness rose from the ashes of Dandelyan and opened its doors in March this year, it was with a promise to impress. The cocktails delivery has been simplified, but more complex in prep. The Pina Highball (Laphroaig, Purple Pineapple blend by Lyaness, Cucumber vermouth and soda) puts a whole new meaning to pineapple in cocktails, whereas the Silver Bullet (Sipsmith, Milk Wine, Lucky Kummel, bitter orange, lemon, cacao) is a testimony to the bar’s bravery in balancing flavours. Even far away from Brexitland, Lyaness knocked our socks off.

House of Rum Brought Mauritius to the Center of Berlin

“Rum makes people smile,” said Ian Burrell, Global Rum Ambassador and partner of the Mauritius House of Rum Project. For the first time ever, the BCB created a stage solely for rum. Enter “The House of Rum” to leave rainy Berlin behind, with sandy beaches and two floors full of rums to taste from across the regions. Country of honour for this year’s BCB 2019 was Mauritius, an island rich in rum-making history and bustling with quality rums of different styles. Local sugarcane and European techniques have created some interesting blends well worth checking out, including Rhumerie de Chamarel and Grays Ltd. Thanks to the global rum craze, countries like Mauritius are starting to make their way to bars and consumers. “A lot of it is down to events like the BCB,” says Ian. “Sales and distribution have always been there, but now the knowledge and understanding have grown.” The House of Rum provided a great opportunity to educate the palate on rum distinctions. After all, just as it is with food, a country’s culture reflects through the spirits it produces.

If you haven’t read the first part of our summary from Berlin, turn to it straight away. In the next article, focus on our local scene will return and there is a lot to catch up with. New menus are popping up and hot wine is starting to smell in the air as winter approaches. Until then, stay warm!