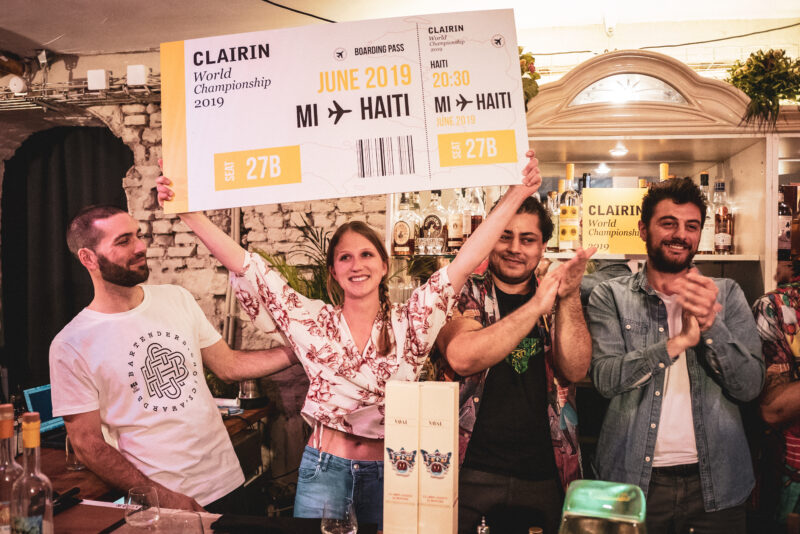 Sarah Dietmayer from The Barking Dog through to Haiti.

On Tuesday afternoon, nine very talented bartenders gathered in the charming basement of Kyros & Co. to showcase their interpretations of Haitian culture in a cocktail. It was time for the Danish round of Clairin World Championship.

The goal of the competition was to come up with a reproducible, preferably high-volume friendly drink, that uses Clairin Communal as its base spirit. The contestants were encouraged to integrate elements typical of Haiti, with in particular hibiscus, orange and chocolate used a lot. The judging panel consisted of the European pioneer of Clairin, Daniele Biondi from La Maison & Velier, self-proclaimed rum geek extraordinaire Daniel Nunez Bascunan from Nordic Rum Festival and the owner of the hosting venue, Christian Tang. Everyone was pleasantly surprised by the high level of quality and creativity the participants displayed, but in the end, only one could be named the winner.

In a poetic way, the fresh zest of the industry took over the competition. Sarah Dietmayer took her first steps behind the bar six months prior and this was her first competition ever. Supported by her crew from The Barking Dog, Sarah presented her cocktail, The Vodouist, in a very elegant, yet fierce serve complimenting Haitian traditions.

The main theme of her drink was Haiti’s traditional religion, Voodoo. Sarah presented her drink in a frozen orange shell that perfectly enhanced the sweetening agent, a homemade orange caramel. Served on a small plate with dried hibiscus flowers and a colorful skull, the whole presentation was a ritual in itself. Dry shaken, then shaken with ice. Strained into a frozen orange shell and served on a plate with dried hibiscus flowers and colorful Voodoo skull

The Vodouist is a twist on classic sour that respects the base spirit to the point. Instead of using sugar, Sarah prepared a homemade caramel reduced with orange juice, which referred to the vast orange plantations of Haiti. And instead of Angostura bitters, hibiscus bitters came into play. Hibiscus is considered a plant of life, courage and rapid growth and is unofficially the national flower of Haiti. A dash of Absinthe complimented the vegetal notes of Clairin Communal.

What separated Sarah’s drink from the rest was the unmistakable taste of Clairin on the first sip, and how it continued to evolve as all the other ingredients moved around your palate. The Vodouist was decadently rich in texture, yet with light, floral, and fruity notes perfectly wrapped around the sharp kick you get from Clairin. The next step for Sarah is to make the same impression on the judges in the world final, which will take place in Haiti this June. We are looking forward to hearing about her trip and you can be sure that we will closely follow the story of the Vodouist.

Into more competitions? Check out our report from the Nordic Final of Bacardi Legacy. Also, don’t miss out on our interview with Max Scott. Photo credit belongs to Alexandre Archimbaud from Our Man in Paris.