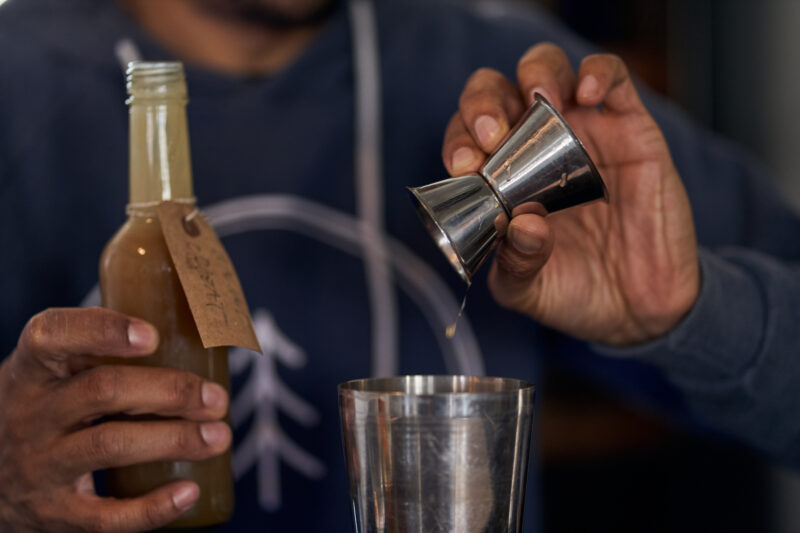 Come to grips with the grape

When creating a new cocktail menu, the sky isn’t always the limit. Small things will always play a role, such as seasonality and general industry trends. Constantly trying to find a way around these obstacles can sometimes kill the creativity behind the bar. At Kester Thomas though, boundaries aren’t the demotivator as much as a catalyst for new, innovative ideas. In fact, when “grape” become the shared denominator, the bar has proven more than once that creative thinking can go a long way. The current menu is no exception, but the gear has changed. “In the beginning when I was thinking of ways to use grape, I was keeping it simple,” says Erwan Le Bonniec, owner and bar manager. “This time, I’ve gone crazy.” However, it’s not an in-house rotovap or basement fermentation lab kind of crazy, he is talking about. Kester Thomas’ Spring/Summer menu is keeping it simple in the recipe, yet intricate in its choice of ingredients. An excellent example of this is the Lord of Grapes. Inspired by the Mai Tai, but developed with a grape-sin mind, this cocktail doesn’t stop at one grape spirit but combines cognac, Pisco and even verjus in the mix. The main spirits substitute the light and dark rum of the classic recipe, whilst delivering the promise of a grape-based, spirit-forward drink.

Verjus, a French sour-juice made from unripened ugni blanc grapes, is the main protagonist of this season’s menu. Before citrus ever arrived in Europe, verjus was the acidic star of la cuisine française. By harvesting unripened ugni blanc grapes at their highest point of acidity and combining them with other sour fruits (and sometimes even lemons, herbs or spices, depending on region, country or in-home customs), people were and still are able to make what is essentially a naturally powerful and healthy flavour enhancer. Having in recent years returned to fame, a stable ingredient in professional kitchens around the world, it’s not unlikely that a renaissance in the bar scene is soon to follow. At least that is what Erwan is hoping for.

The Ultima Parola is another example of how Kester Thomas sees the world through grape-filtered glasses. Playing on the multitude of ingredients in Italicus, the Italian regions are allowed to shine through in a potent blend of perfume and savour. “My desire was to make each of Italicus’ ingredients shine even more,” Erwan explains. Indeed, only a professional chef would give the same kind of attention to perfecting the flavour of a vegetable, as Erwan has given to Italicus. “And the grape,” he adds, “well, that’s just who we are.” With the Ultima Parola, one sniff sends you into a hypnotic daze of aromatic ecstasy, reminiscent of scenes played out in the French film Perfume. Should this cocktail indeed be one’s last word, it’s not the worst one to utter. As always Kester Thomas’ menu has more than just grape juice to offer in its seasonal take on grape-based cocktails. Finally, the true creativity of the bartender comes to light in the carbonated Harvard, proving that behind the bar, we’re all really just children.

While we work on some exciting news, feel free to re-visit some of our favourite bars and maybe even in person. Enjoy First Kiss while supply lasts or dwell in the lounge of your cocktail-fueled dreams. Follow us on Facebook for updates!