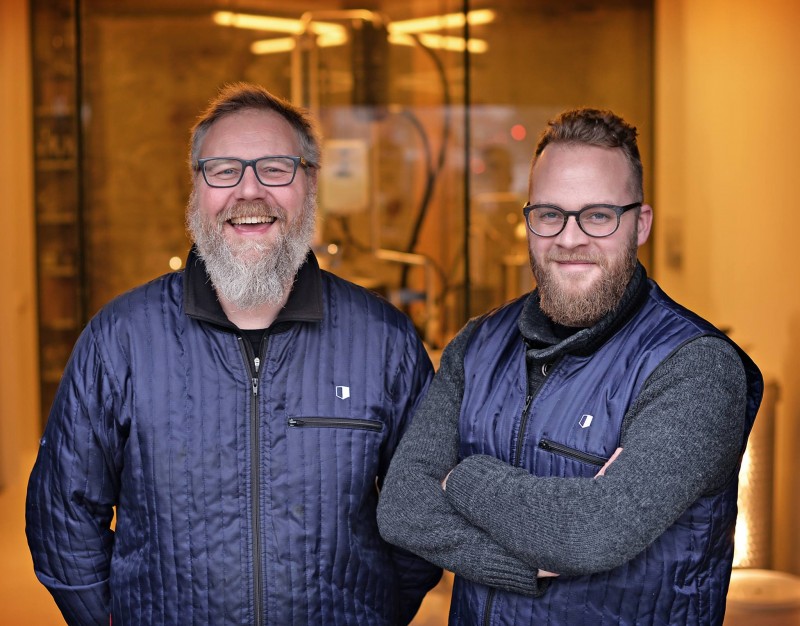 Some would call it crazy. Investing your money in whisky production is not a game for the faint hearted. The destillation setup requires a huge investment in production equipment, storage
facilities and years in the making as the whisky-to-come has to wait around in barrels for at least three years before you can even call it whisky! Much can go wrong in the process. You can’t be risk averse in this game! It takes true entrepreneurial spirit and serious passion for the product to embark on this quest. But if you have these qualities to the degree that Henrik Brinks, founder of Copenhagen Distillery, does, it’s not a question whether you should do it or not. In fact it’s not a question at all. It’s a matter of making a dream come true and honoring your worklife with a worthy purpose.

When we visited Henrik and his partner Sune Urth at the distillation facility in a protected cultural heritage boulder building in Kastrup,  they had just introduced their Jule schnapps with great success and were excited to launch their new Mexican Coffee Liqueur.

Ever since his first visit at a whisky distillery in Northern Scotland, Henrik has been dreaming of starting his own whisky production. As a life long whisky saveur, this was the most rewarding endeavor he could imagine spending his work hours on. After many years of working with other startups and general business development, Henrik, who originally was educated in law, decided to take a shot at his dream and founded Copenhagen Distillery in 2013. December 29th 2014 the 320 liters distillation apparatus build in Germany began cooking… The challenge was to create a unique product that would be different enough to excite himself and others. When Henrik tasted his first batch five months into the barrel aging process he knew that he was on the right track. Even after having tasted 450+ single malts during his life as a whisky enthusiast what he tasted surprised and excited him.

The coming whisky is aging on pure virgin oak barrels charred according to the specific wishes of Henrik. According to plan it’s ready in 2017, but only if Henrik is satisfied with the result!

We were lucky to try a sample and even now the taste is surprisingly different compared to most other peated whiskies. It has a unique animal taste to it – reminding one of smoked mackerel, dried fish and malt candy. Everything at Copenhagen Distillery is cut to the core. Henrik wants to keep the production process as simple as possible. The focus and key competence is the distillation process. So the fermentation and mashing process for instance is left to someone else who can do a better job at that. The partners just have to be ready to make something different. Urth, bar and spirits manager for Aarø & Co – the owners of Restaurant AOC and the aquavit project bar No2, joined the team. For many years Sune had been exploring local Danish ingredients and had been dreaming about producing his own spirits. When introduced to Henrik and his entrepreneurial vision he realized that now was a perfect chance to take his taste lab experiments to the next level and put his own label on a bottle!

Sune has played a key role in the production of the newly released Mexican Coffee Liqueur and is about to bring a unique Taffel Aquavit to market (Hr. Urth’s Sort Taffel). In the product portfolio you also find a honey mead based gin with few ingredients but incredible complexity.  It’s not your regular gin at all. And Henrik Doesn’t want it to be. For this reason many might not like at first try. It’s something for people looking to challenge themselves with completely different kind of gin.

In the pipeline you also find a long pepper schnapps and a cherry liqueur. So there’s plenty to go around while we wait for the whisky!