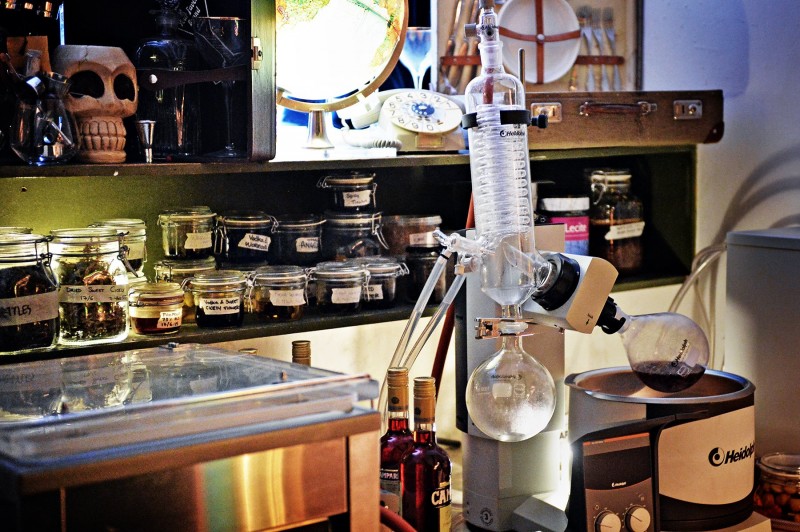 “We have no concept here. Just creativity”

There’s a new breed of bars in Copenhagen. With a good base of classic prohibition style bars the Copenhagen cocktail scene has grown enough so you can also do your own thing besides reviving the classic virtues. Balderdash is one of those bars.

Balderdash means gipperish or non sense, bar talk. And that actually says a lot about the atmosphere that bar manager and owner Geoffrey Canilao wanted to create with Balderdash:

“We have no concept here. Just creativity. With Balderdash I wanted to create a bodega like atmosphere without too many restraints on the kind of night you’d want to make for yourself. It’s up to the people coming to make an evening and a meeting out of it.”

Balderdash might not be a concept bar but that doesn’t mean that it has no story. the bar is in a protected landmark building from 1732 with a lot of history to it. In its infancy it was a restaurant owned by some of the first Jewish immigrants and has since housed a shoe maker, a silversmith and a barber. Drinks were served there when it was one of the old bars (vinstuer) in Copenhagen called Kontoret and the first bar to have a telephone. This is why you see a lot of telephones in the Balderdash today as Geoffrey liked the idea of preserving some of the old soul of the building in is current day use.

In many ways it’s a very Danish bar even though it’s owned by a New yorker. Instead of looking to New York and London for inspiration as many do, Geoffrey thought why not reverse it; letting the cocktails and atmosphere take root in Copenhagen? The first menu was molded over the subway system in Copenhagen and the cocktails were named after the stops. On the menu you’ll find a lot of the Danish “classics” such as Brandbil… You might not have the most ond memories of these, but at Balderdash they are mixed with a whole lot of love and good quality spirits making them so good that you hardly recognize them. To top it all off; above the entrance the word “hygge” (cozy) is bent in neon.

A long side the heritage interior and the Danish references you’ll find an ambition to push the limits of flavor profiles and challenge your taste buts.  In the lower part of the bar you find Geoffrey’s cocktail lab, where he experiments with flavor profiles, reductions, clarifications and other ways of isolating senes perceptions. Some of the results of the lab work are Flæskesværd perfume, ant bitters, a clarified Hemingway daiquiri and a smoked bone marrow and burned butter old fashioned!

Balderdash is creativity, fun, experimental events, non pretentious quality and whatever you make of it. It will definitely not stay the same and the menu is ever changing, even from one day to another as you might bump into pup op guest bartenders or a one night only tiki tuesday cocktail selection.