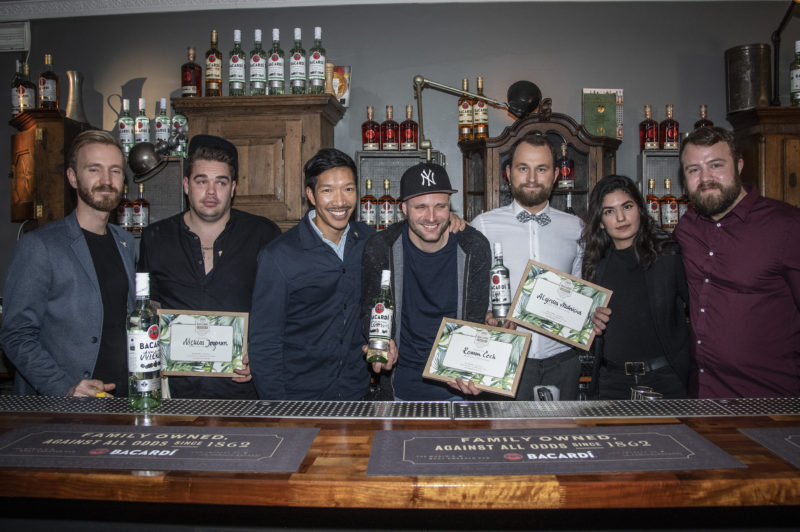 The Danish qualifying round of Bacardi Legacy 2019 is behind us. Eight bartenders faced off at Lidkoeb in a long and delicious battle. Some came up with a great story while others filled the air in the room with the smell of toasted cinnamon. In the end, three most promising cocktails (and their creators) are now getting ready for a Nordic final in Stockholm, which will take place early next year.

Each year thousands of bartenders from all over the world enter Bacardi Legacy. Similarly to other competitions, skill is not the only thing that defines the winner. Here, the judges are looking a fairly simple, easy to promote, yet delicious cocktail to join the ranks of the most famed classics such as Mojito or Old Cuban. You can be a skilled networker or have the palate of a Michelin-starred head chef but you can still be beaten by someone with impeccable marketing skills.

So what does it take to create the new Daiquiri? Four respected judges were all looking at all cocktails from different angle.

“The winning cocktail should have a legacy potential. I was evaluating the branding and PR potential of each drink – the aesthetics, presentation and the quality of the story.

“In this competition, it’s not about being avant-garde, but rather demonstrating solid craftsmanship. I was looking for a crisp, welcoming drink with a broad appeal.”

“I’d love to find a drink that I want to order again, a classic with a great balance. One that says 2019 just as much as it feels like a classic. It’s important that the drink is easily replicable and maybe even makeable at home. It’s not just about the drink itself, it’s also the presentation and the person behind it.

“Besides delicate balance, focus on simplicity and well-crafted presentation, I was looking for a drink that allowed the rum shine through, rather than masking it behind other flavours.” After much suspense, the three most promising drinks were announced. Representing Denmark in Stockholm will be three Copenhagen-based bartenders: Roman Čech, Nicklas Jørgensen and Algirdas Mulevičius. The inspiration for this drink came from a book called “Bacardi and the long fight for Cuba” by Tom Gjelten. According to Tom, the four main principles of Cuba are Intrigue, Romance, Partying and Revolution. And each of my ingredients is tied to these themes.

Our taste: Algirdas delivered a drink, whose creaminess was very present but surprisingly didn’t overpower the other ingredients. Carta Blanca was adding a lot of pleasant heat while the sherry brought the cocktail together. The choice of citrus complimented the complexity of the drink and added much welcomed freshness. Ánimo means, besides other things, spirit, soul and mind. To create something unique and special, I’m taking ingredients that I’m personally connected with and combine them with components commonly used in many classic and modern recipes.

Our taste: Roman delivered one of the most classic-reminding drinks in the competition. Using very traditional spirits he got our tastebuds comfortable, which allowed the bay leaf syrup to shine through. The cocktails was very light, elegant and tasty. “Thrown” and served over ice block/sphere (looking like a moon)

Our taste: Unlike the other competitors, Nicklas came forward with a very boozy drink that reminded us of an Old Fashioned. The hard-hitting yet smooth cocktail left us on an inviting note so we immediately had another sip. It was one of the drinks that showcased the rum in its completely fulfilled potential.

After the Nordic Final in Stockholm, the Global Finals will take place in Amsterdam in May 2019. We are wishing all the guys the best of luck and who knows, maybe we’ll the first Global Winner from Denmark!

All photos in this post are shot by Peter Bondo Gravesen.