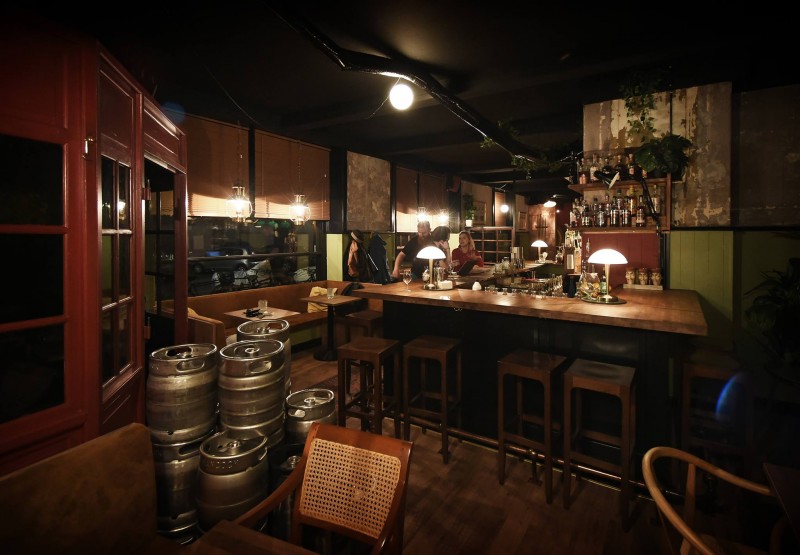 This is not a cocktail bar!

Where do bartenders go out after the cocktail bars are closed? Usually they rendezvous at dodgy dives (or “brown bodegas” as they are usually called in Denmark) nothing like their own posh turfs. That’s what Terkel Kleist used to do many years ago when he and other Danish cocktail pioneers were carving out the foundation of the Copenhagen cocktail scene as we know it today. After service he would go to one of these bodegas – kick back with a beer, light a cigarette and think “oh my god – this is what I actually wanna do”. That’s when the dream was born; a bar of his own – a non-pretentious place with draught beer and a good selection of quality booze.

This dream was made real in April 2017 when Terkel opened Gensyn together with his partner in crime, Dave Jackson.

“We wanted to create a place where people don’t have to dress up or worry about having to spend a lot of money. It just had to be simple and really f*cking nice.” – Terkel Kleist Two old lanterns and a green wooden door mark the entrance to Gensyn on the corner at Rolighedsvej 20. The outside façade still looks a lot like that of the old “Husar Pub” that used to be the local hideout in this part of Frederiksberg. Gensyn is in fact build on the rubble of this old bodega – and it shows. Although the bar has been completely refurbished Terkel and Dave have managed to maintain a whole lot of the bodega charm of the old place. The original light green wooden panels still embrace the space and the centerpiece behind the bar from across the entrance is Husar Pub’s old billard table. The table has had makeover and now outshines its previous worn down green with its new burgundy upholstery, which matches the dark dramatic colors of the new interior.

The menu offers a lot of really good cocktails along with other tasty treats. You can choose between 150 different whiskies and eight different draught beers. The beers are from small Danish producers like Herslev Bryghus, Hancock and Brus. All the beers can be enjoyed with a recommended whisky pairing or you can explore the world of whisky on its own with a “flight” option from the menu which introduces you to three different and carefully selected whiskies.

“We try to stay away from the monopoly of the booze and beer world. We wanna be a small neighborhood bar so it only makes sense that we work with local producers who are as small as we are.”

Most of the drinks are pre-batched so they can be served quickly. It’s not about the show – it’s about delivering a great drink and not making people wait for it. But don’t be fooled – a lot of the pre batch specs have taken months to perfect. The owners insist that it’s not a cocktail bar, but no matter what you might or might not want to call it – you can have some damn good cocktails at Gensyn. Gensyn must be the only place in Copenhagen where you can enjoy a well-balanced old fashioned with a couple of friends over a round of Danish five-pin billards. It is exactly what Terkel envisioned in his early days behind the stick: A relaxed and non-pretentious bar. No huff and puff – just quality products, impeccable service, good beer and decent affordable drinks.

Gensyn was just awarded Best New Bar in Copenhagen 2017 at the recent Bartender’s Choice Awards in Stockholm. Read about the other Danish winners here or follow our Facebook site, Instagram profile and monthly newsletter To have reviews on the best cocktail bars in Copenhagen delivered straight to your feed or indbox.