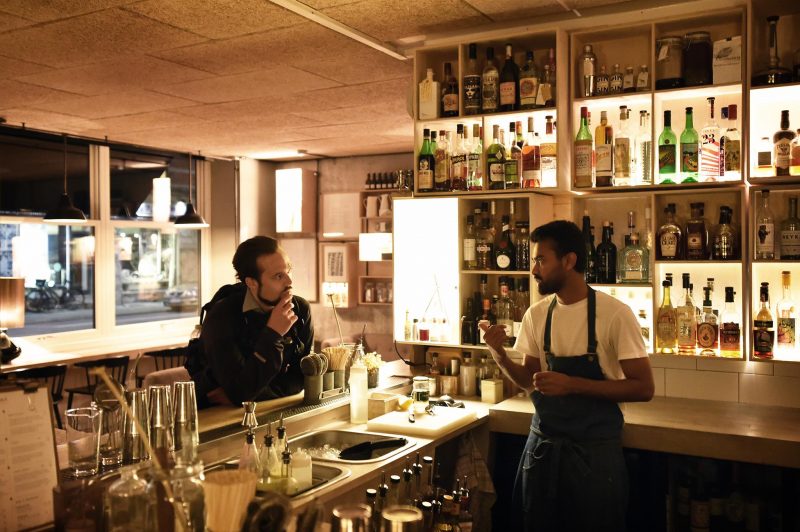 Ebb and flow of Nørrebro

Most cocktail enthusiasts think they know all the oldest cocktail joints in town… But not many are aware that GILT, established in 2003, is right up at the top – only second to K-bar in terms of years in the game. GILT is one of the oldest cats on the block but it’s always been cruisin’ under the radar of mainstream attention. The man behind GILT, Peter Altenburg, has worked in the industry for more than 20 years. The many years of experience between him and his elite bar crew Viktor Hägglund and Chris Gormly has been pumped into the bar through the years, which is probably why it’s successfully stayed in the game for so long.

The interior of the bar is quite dark. Chopped fire wood is stacked along the walls in the back. Behind the wooden bar are jars holding infusions of different kinds. It’s a perfect hideout on a windy day where you can follow the life unfolding beyond the windows from a comfy couch with a drink in hand.

Situated on Rantzausgade, GILT has always followed the ebb and flow of its Nørrebro neighborhood. For many years GILT was hidden behind shotters. When the neighborhood was troubled by clashes between police and autonomously minded youth (Look up “Ungdomshuset” – Jagtvej 69 to get the full story) this was a way to avoid excessive expenses to cover shattered windows. As Ranzausgade grew more hip, with new beer bars and restaurants popping op all over the place, the shotters have been exchanged for windows and a more open atmosphere. The coming and going of different trends on the cocktail and food scene have also been a determining backdrop for the evolving life of the bar. Before the cocktail mania spread through Copenhagen like wildfire GILT was focusing on classic cocktails and modern crowd pleasers. Ruby upped the game when it opened in 2007. Good quality drinks were not enough anymore and so service and menu concepts were improved at GILT resulting in overall better bar experiences for guests.

When NOMA was awarded the world’s best restaurant in 2010 the GILT-crew was asked to serve Nordic inspired drinks with local ingredients for the Copenhagen Cooking festival that same year. This inspired the cocktail crafting in the bar for the following years and the menu still portrays lots of  local Scandinavian flavors. Many new ideas are on the horizon as well – like breakfast servings for early risers or menus focused on highballs and vermouths or classic cocktails without alcohol… Who knows what might be coming up!?

Whatever it is – be sure to check it out – the drinks are always well crafted with unique twists and their signature cocktail The Hazard which never leaves the menu is one of the best Old Fashioned servings in the city.

GILT might be one of the oldest cocktail bars in Copenhagen, but it doesn’t stay the same – it’s renewing itself by constantly asking what a cocktail bar might be.