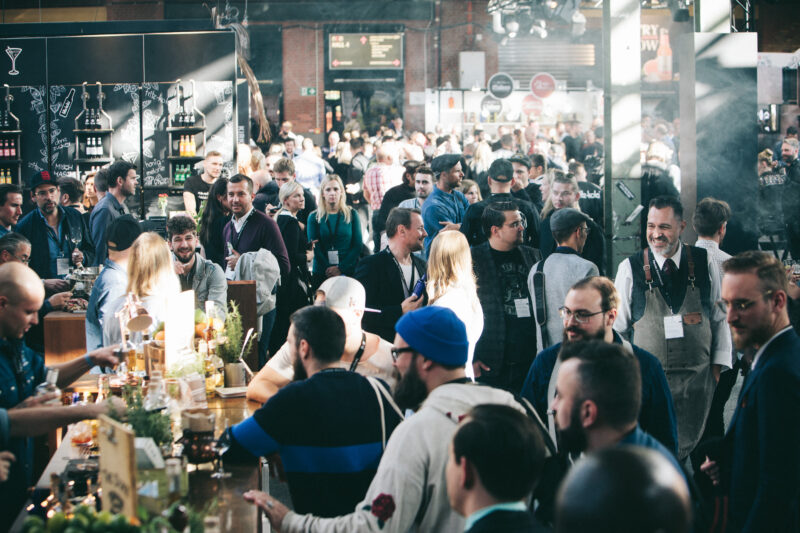 Heads up: Slow Down and Smell the Change

Bar Convent Berlin is a monster of event that once again brought bartenders, brands and enthusiasts together for three days to explore the coming year for the industry. One month later, we reflect on the madness.

In the grand industry halls, the air is buzzing with enthusiasm. Scents of spice, sugar, coffee and spirit mix with smiles, hugs and handshakes. Russian acrobats serve vodka shots from a trapeze and next to you, Salvatore Calabrese is chatting away with Alex Kratena. Old colleagues meet, new friendship bloom and thousands of booze-brethren come together to share at the moment. It’s Bar Convent Berlin.

For three days in October, thousands of bartenders, managers, wholesalers and genuine enthusiasts journeyed to Berlin to nose the trends at BCB, the world’s largest industry event to date. Whether at individual stands, in the Mauritius Rum House, by the reconstructed Lyaness bar or at one of the 8 main stages, the value of flavour, reflection and social responsibility resonated throughout all of BCB. 15,000+ visitors from 86 countries tasted their way through 1400 brands and 120 hours of seminars, as this year’s Bar Convent Berlin took off at Station Berlin and neighbouring Kühlhaus. As BCB Event Director, Petra Lassahn put it, “there is simply no way to fully comprehend the special spirit at this event without being here.”

What is great about having more than 150.000 industry people gathered in one place, is the sharing of experience, tips, tricks and shenanigans. This year’s BCB saw industry rock stars such as Salvatore Calabrese and Alex Kratena dress down and join the crowd to share ups and downs of making it in the industry. And on the very first day, our own Kirsten Holm of K-Bar brought Copenhagen to the crowds, as she featured familiar faces in her video presentation for “Shake or Brake: How to survive the industry and yourself”. Through her own experience, as well as those of Harry Bell, Geoffrey Canilao, Maria Magdalena, Jonas Andersen and more, Kirsten reminded us of the wondrous peeks and dark pitfalls that this industry homes, and how to overcome challenges when they arise.

Another great voice who shared his experience on stage was Tobin Ellis who’s been opening, designing, developing and operating bars in America since the late 90s. Tobin’s talk focused not only on the dos and don’ts but on the multi-faceted aspects of hospitality and on not forgetting where we all came from. More importantly, Tobin reminded us that as bartenders, we are the ones in charge of service – be it in the technical aspect of the matter, or in guiding the experience of the guest from entry to exit. More than once he touched a nerve, as he raised the point of “removing the actual cocktail making from the front of the house to the back,” as a way to minimise stress on bartenders and maximise time spent with guests. Toby made a good case for placing bartenders in the back with chefs – the question is whether the industry is ready to agree?

Levelling flavour in all its simplicity

This year too, BCB put particular attention to the many ways in which we experience, harness, sustain and utilise flavours. Not surprisingly, Empirical Spirits’ Lars Williams drew a crowd as he uncovered his approach to fermentation in spirits making. The Coffee Stage in itself provided an excellent platform for exploring the energiser we all turn to at the beginning (and mid, semi-late and end) of the day behind the bar, with particular focus on flavour extraction and methods useful for the cocktail industry. Filter Coffee showed its appeal to the industry as an overlooked science in the world of brewing, and not only as a way to save space (although that in itself is appealing). Shingo Gokan got together with Maxim Schulte of The American Bar at The Savoy, London, to put their experience on the line, as they dug into the case of balancing innovation with bar success, and how to make creativity an affordable luxury. “You can never go too far,” Maxim stated, yet pointed out that a rising number of bars serve unbalanced drinks without taking a second notice. “The level of creativity depends on the purpose of the experience,” Maxim added – His lesson to the crowd being that liquid always beats looks – especially in a bar where most of the guests never meet the person making the drinks.

The last palate-tickling approach to flavour was served up by Alex Kratena as he presented Paragon, a range of pepper-based cordials that he has been developing for two years in collaboration with Monin. With him on stage was Terre Exotique – a French gourmet and spice distributor – founded by Erwan de Kerros after he discovered the Cameroon plantations that provide the Paragon White Penja. “We live in a corporate world, and I think that it is our duty to protect flavour,” said Alex to the crowd. For each cordial, the base of acid, water and sugar remains the same. Only the peppers stand out, carefully sampled and selected by Alex and Thibault with flavour, biodiversity and fairness to the farmers in mind. In making Paragon, nothing has been left to chance. Like coffee, “you have to taste the pepper in order to understand how soil, temperature, weather etc. affect the flavour of the variety,” Thibault Renaudin of Terre Exotique explained. In an industry where rapid innovation tends to leave our minds wandering high, a back to basics lesson on simply tasting your ingredients before selecting is of high value. Essentially, it’s a matter of believing in your palate. From there on, knowledge and geek-level matters. In Alex’s case, it meant using 100% of creative freedom to harness 100% of flavour. Three methods of flavour extraction later (CO2, infusion and alcoholate), and the result is a fulfilling range of high-quality single-botanical cordials that make the full scope of pepper’s profound flavour readily available behind the bar.

Multiple brands and talks shone a light on the industry’s role in dealing with climate change, sexism and social mobility. Agave production has been a hot topic in the past, raising significant awareness of the huge consequences industry trends can have on people and planet. The topic also landed a spot on this year’s main stage, taking trends already being explored by chefs in the kitchen, to the bar. Furthermore, Imbibe Magazine’s executive editor Paul Clarke got together with Maggie Campbell, President of Privateer Rum and board member of Directory of American Craft Spirit Association, to shift responsibility to every step of the supply chain. “Only by raising our own awareness can we make an impact farm-to-drink,” said Maggie, who in her work with Privateer Rum has ensured that every step of the way, from water usage and heat recycling to bottling and distribution, her rum production is as good for the planet as it is for the bar.

As bartenders, we naturally find ourselves at the forefront of key social issues. The long hours, harsh working conditions, low wages and combination of mental and physical stress makes our industry one of the hardest to work in. But it’s also one of the most open and welcoming, regardless of your social or national background. The industry’s open approach to individuality – “humans as humans” if you like – is finally starting to manifest into more than just an unwritten rule of making it behind the bar.

Stephanie “Polly” Simbo reminded us of that Monday afternoon at BCB, as she brought the stories of 10 female ex-inmates from South Africa’s townships with her on stage. An old friend of yours truly, “Polly” left her bartending days in London (and the flat we shared in Aldgate East) behind to open Beyond Bars Akademia (BBA) in South Africa. In a nutshell, BBA is ‘bartending school meets charity’, aimed at educating formerly incarcerated women in the ins and outs of hospitality. Two years down the line, Polly’s established a rock-solid charity fighting stigmas and combat statistics. In a society where a whopping 85% of people return to prison, all of Polly’s 10 students went into employment. And within 6 months, eight of them had risen to a management position. “When you employ the formerly incarcerated, you help rewrite the narrative,” Polly noted, reminding us of the powerful impact we hold as employers, trendsetters and educators. “These women are now in the position to themselves hire humans at a disadvantage and successfully change the stigma.” There’s something magical about seeing the person you sat across from 4 am in the morning in a London flat two years ago, become the hospitality industry’s rum-loving reincarnation of Mother Theresa. It just goes to show that individuals craft this industry – and whether it improves is up to us.

Each year, the BCB homes many great new brands making their way into the conscience of bartenders. We sampled spirits, liqueurs and no-ABVs alike – check out our favourites and see what to look out for here.