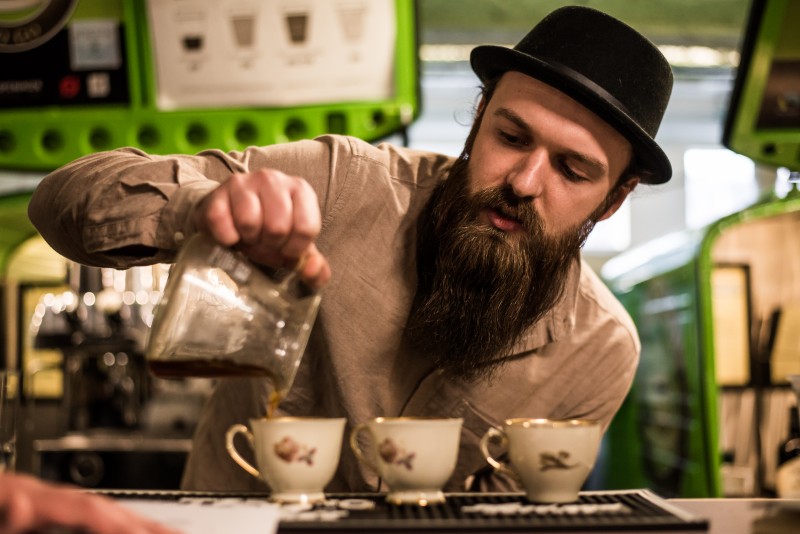 Top local bartenders called upon to save IC from itself

The Irish coffee has a mixed reputation. Some love it unconditionally others can’t get beyond that one time when they were served an overly sweet or boozy version with burned coffee and way too much whipped cream. Preferences apart – one thing’s for sure; not much has been happening with the Irish Coffee in the past many years. So how do we revive this classic from the stale cocktail swamplands where some classics end up after drowning in their own success? To answer this question, last week Copenhagen Cocktail Club called for a masterclass and a cocktail competition in collaboration with Teeling Whiskey and Copenhagen Coffee Lab. The challenge was for our local bartenders to save the Irish Coffee from itself by bringing some needed innovation into the picture.

Two winners were found and awarded with a trip to Ireland – Alex Smith for brewing the best coffee and Chris Stewart from Balderdash took the prize for serving the best Irish Coffee – his Irish breakfast interpretation “Black Pudding Matters” closely followed by Morten Bach Nielsen from The Barking Dog.

In my opinion “Balck Pudding Matters” a perfect Irish whiskey and I asked Chris to share some thoughts on the making of it: “The Irish Coffee is a classic cocktail. Unfortunately, we have all been served terrible bastardized versions of it at some time or another, but it is truly a great drink if it’s done right!

I would never pass on a chance to do something different with Irish products so this competition seemed interesting. I learned more about coffee and whiskey by participating and what’s not to like about whiskey and coffee?”

“For the last year or so I have been able work with a few chefs and restaurants. I became a lot more reflexive about flavors and ingredients. When working with cocktails I try to connect flavours and memories. When thinking what flavors come to mind when I think about Ireland; breakfast with black pudding and bacon is on the top of the list.” – Chris Stewart The rest of the day was dedicated to knowledge building and flavor exploration. Ireland’s ambassador Cliona Manahan paid a visit and Sune Urth gave a masterclass on coffee and spirit infusions and introduced a suggestion for a simple afternoon drink which is hard to spoil with the Mexican Coffee Liqueur from Copenhagen Distillery in a wonderful mix with Teeling whiskey and ginger ale. Served over ice with a ginger ale float and a lemon zest as garnish in a tumbler glass.

Interested in cocktail competitions and what it takes to win? Read about our Danish contestant for the Bacardi Legacy global finals, Scandinavia’s best Linie Aquavit cocktail that won last year’s Nordic “Linie competition” or the Danish representative for the global finals of the gin competition “Beefeater Mixldn”. Sign up for our monthly newsletter to have news about future competitions delivered straight to your inbox.