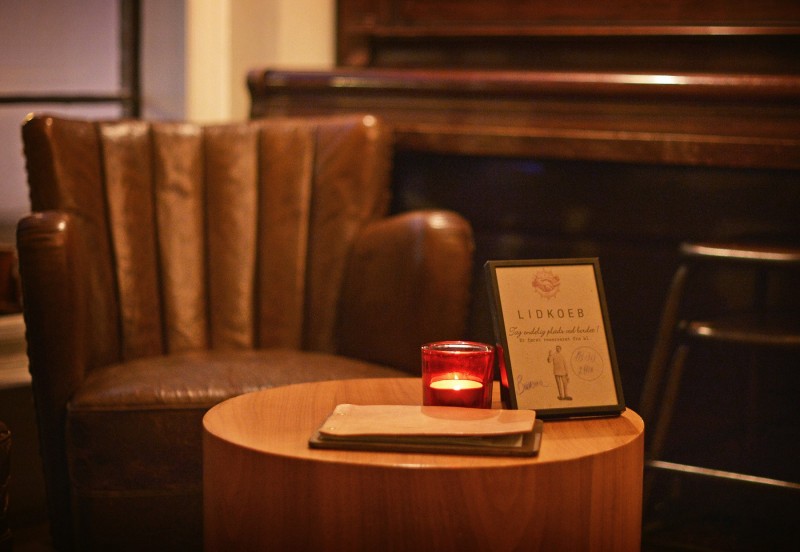 You pass through one of the oldest buildings in Copenhagen as you enter Lidkoeb which itself is housed in a charming old pharmacy built in 1886 by pharmacist H.P. Madsen. Lidkoeb has been a smashing success story since it opened in 2012.

It can be a tough game launching a new cocktail bar in Copenhagen with a sizable base of already established high end bars. But Lidkoeb never had to struggle. Maybe because it was the first of it’s kind on Vesterbro, or maybe because it was the founders of Copenhagen’s cocktail crown jewel Ruby, who decided to raise the bar a cross the Western bridge of the city. One can keep guessing, but the fact is that Lidkoeb rocketed through the cocktail stratosphere from the very start and have stayed popular ever since. In 2013 Lidkoeb opened it’s third deck and stayed afloat. Lidkoeb is a force to be reckoned with.

The founding couple Adeline and Rasmus Shepherd-Lomborg know their game and they know it well. Since they returned to Copenhagen in 2005 after many years in Edinburg and Manchester it seems they have had an unwavering vision of putting Copenhagen on the international cocktail map. And so they have. Ruby is on the top 50-list of best bars in the world and Lidkoeb is founded in the wake of this success and has made it to top 100. All cocktails on the menu at Lidkoeb have Danish names and the managers take pride in building the menu, always with an eye for interesting flavor mixes and variety. The menu changes three times a year and each time the bar staff competes against each other with their suggestion for a new cocktail listing within a certain category. One is picked based on votes from the colleagues. In the weekend the staff counts 15 heads and the team is diverse as the menu with seven different nationalities present (see our article on Likoeb bartender Anna Hellmann-Clausen and her Bacardi Legacy cocktail Two Mothers). It’s not unusual for bars to recruit skills from a broad as Copenhagen can hardly provide the number of skilled employees needed to staff the fast growing number of cocktail bars in the city. None the less, new bar staff at Lidkoeb always have to go through the 10 shift intro training required to maintain the high quality standards of the bar.

On the first floor you find a long wooden bar, industrial lamps, lots of table seats along the high vaulted cast iron windows and an open fireplace where they used to cook the the pills in the pharmacy laboratory. Compared to Ruby, Lidkoeb is more of a get-together bar. It’s bigger and during weekends it’s crowded. The third floor is the exception on weekend evenings. Here the bar is dedicated to whisk(e)y and whisky lovers with mor than 200 bottles from around the world and it only serves seated guests. Surrounded by antique leather furniture, wooden beams and sloping walls it’s even more intimate than Ruby.

During the week you’ll meet a lot of international guests. Many of them food tourists flown here to dine at NOMA or other acclaimed restaurants. All through summer you can join pop up food events in the yard on Mondays and wine sale in the stable building where the pharmacist used to keep his horse. In the winter months the fire place is lit and always you’ll be met by the characteristic colorful lights in the yard in front of the pharmacy building.

Lidkoeb means an affirmation or celebration of a successfully concluded trade with a drink.