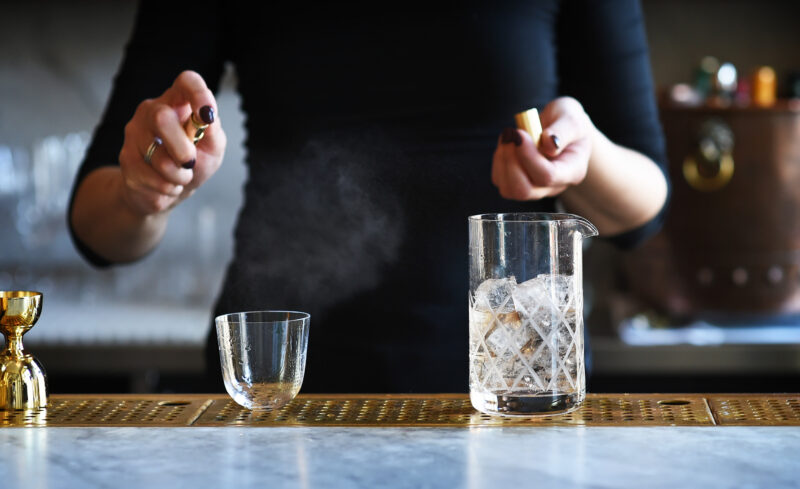 Dimensioning the flavours of Spring

From seasonal concoctions to twists on classics, Ruby is capturing the changing of the seasons from late winter to early summer in twelve delicious cocktails. The new menu is divided into three sections, showcasing both new and reworked seasonal cocktails as well as classics, housing a range of experimental flavor compositions.

In the classics menu, Ruby is offering guests a choice: stick with the standard, or try a premium Nordic twist. Or as they say themselves; forward thinking, classic drinking! Their Rock N Rye, for example, is a sturdy Old Fashioned made with American Bulleit Rye and rock candy syrup. As you are leaving winter behind, having a Rock N Rye in your hand is a great transition towards sunnier times. A classic rye-based Old Fashioned takes on a lot of depth with the addition of flavourful sugars that bring vanilla, nutmeg, and licorice into the mix. An intense, tingling and enticing sweetness creates a great canvas for the warm qualities of rye and as the finishing notes dance on your tongue, you are already taking the next sip.

Should you feel like venturing out of your comfort zone, you can try their twist on the classic with the Danish whiskey Stauning Malted Rye, which adds a Scotch-like character to the drink. The result is an incredibly aromatic old fashioned with a distinct sweetness that doesn’t overpower the whisky. On Stauning’s Malted Rye, the drink’s finish is extremely complex as the barley and rye fight for your attention. All ingredients stirred to dilute and served over a large ice cube. Garnished with a lemon twist.

The other two choices rest between brand new Ruby cocktails and reworked drinks from older menus. With both, the aim is to touch upon flavors representative of the changing season. The beginning is rather dark and heavy with a lot of rum and cognac representing the passing of winter. The end is light and floral with meadow green, rosy pink and bright orange to lure you into trying ingredients such as lemon verbena, melon, and fennel. Following a long, dark winter in Copenhagen, this touch of light and love is much welcome.

To have a sip of early spring, try the Lagerita Fredo – which, according to bar manager Jeppe Nothlev Schefte, is Ruby’s own take on the infamous Lagerita (a classic Margarita topped with beer). The untraditional mix of tequila, beer and Cappuccino Freddo (a frappuccino from before the Starbucks empire), and will leave you wondering what kind of journey you are actually embarking on. Specks of smoky lapsang souchong/cinnamon dusting on top leave an impression as complex as the base of the drink itself. The initial smell of cinnamon forthbrings memories of Christmas, soon to be replaced by images of a sizzling BBQ in the summer. The first sip highlights the espresso, beer, and lime in a similar way you would experience an espresso tonic – light and refreshing with a sour and tingling sensation. The mezcal-tequila combo doesn’t interfere much with this first impression but saves its magic for the finish. A vegetal note towards the end is an amazing surprise for your palate that compliments the drink’s freshness. Sipping this one while looking over the sunny streets of Copenhagen is a spring vibe we can get behind. Shaken and served in a highball over cubed ice, with a pinch of cinnamon and lapsang souchong powder

As we get further into spring, everything starts blossoming. This calls for a green cocktail. Loveage Fizz comes off as the bartender’s basic breakfast smoothie, but inside is a complex set of flavours that develop with each sip. It could easily be a doctor’s prescription – the nose is very herbal, green and you might catch a slight hint of carrot leaves. Yet, the palate is a different story. The addition of ginger beer cuts through the botanicals of the drink and balances them with spice. A herbal highball that could easily pass for an alcohol-free drink is a great start to a sunny spring – and a good way to get your five a day…

Dry shake all ingredients but the ginger beer, add ice, shake to chill and serve in a highball. No ice, no garnish.

And when summer starts knocking on the doors, we are ready to jump into another summer romance. If you are single (or ready to mingle), look no further than First Kiss. It is a grandiose love-affair between Ruby and Empirical Spirits, presented to curious drinkers in modest minimalism. This complex twist on a Wet Martini will seduce you with its rose-golden appearance and enchanting aromatic nose. Depending on how eager you are for a romantic adventure, it can either be a quick fling that will have the bartender stir another in a matter of minutes, or a long-lasting enjoyable relationship to keep you company in the afternoon sun. Stirred in a mixing glass and garnished with a spray of verbena and floating verbena leaf.

The Spring menu of 2019 it the first at Ruby to be supervised by the bar’s new general manager Jeppe Nothlev Schefte. In collaboration with his bar team, Jeppe is presenting a new generation of cocktails that aims to cater to all interests and touch upon multiple flavours and impressions. The goal is to entice the eyes and satiate the senses and it surely worked on us. You may very likely see us at the bar again soon.

Do you have your own favorite from Ruby’s new menu? Tag us in your Instagram stories! If you’d like more inspiration for your next cocktail outing, check out some of the bars we have previously written about. Cheers to the weekend!