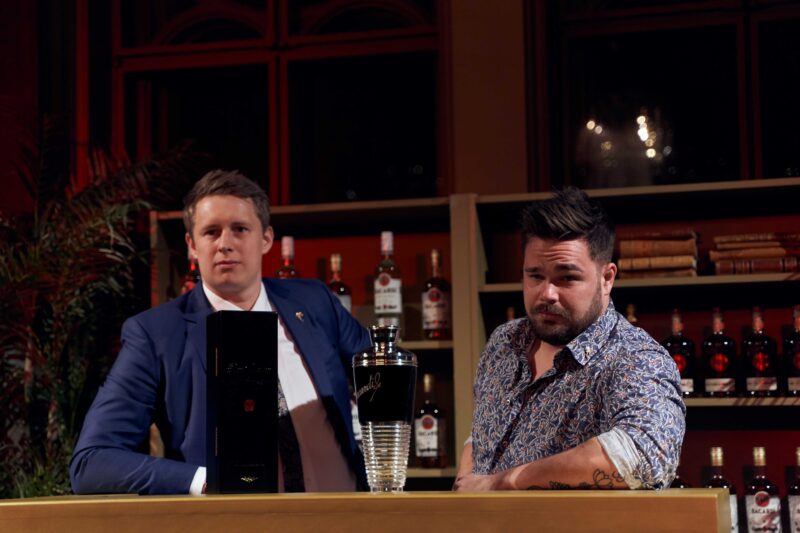 Leading Denmark to the Legacy

What I leave behind is the gift of becoming a father

30-year-old Nicklas Jørgensen is a familiar face to many in the Danish bar industry. From his days at former Top 50 cocktail bar Ruby, to opening his own bar Helium and co-authoring Denmark’s first bartending guide, Nicklas has dedicated his time to the ins and outs of bartending. This month, he is taking it a step further, by representing Denmark in the globally recognised industry challenge, the Bacardi Legacy Global Awards. Established in 2008, Legacy, as it is commonly referred to, require contestants to gather all their knowledge and the best of their bartending skills, in order to push the boundaries for creative and personal expression. This year’s competition is taking place on 13th May in Amsterdam, home to last year’s Legacy winner. When Nicklas goes on stage, he will be up against 47 of the toughest contestants from all areas of the bartending globe, all in the race to leave their legacy behind.

When he first jumped behind the bar at a disco aged 17, nothing could have told him he’d end up here. “I actually wanted to be a DJ, but I have absolutely zero percent rhythm in my bones,” he admits with a grin. Yet, in spite of his bulky build he is as smooth behind the bar as a gymnast on a balance beam. Not surprising with a career spanning 13 years in some of Copenhagen’s top establishments.

Nicklas knows he is good at what he does. “I’ve been stirring drinks for 10 years, so I know my technique is on point,” he says. Yet, when talking about himself, Nicklas is as honest and humble as his industry beginnings. As a young kid at the disco, he knew no limits when it came to drinking or partying. But he admits that at a certain point, the scale tipped over. “I realised I had to move forward. That’s how we all start, at the disco, and then we figure out whether we like bartending or not” Working for a wholesaler, his knowledge of refined and rare spirits expanded. Gradually, as his interest grew, so did his collection of cocktails, spirits and bartending books. To this day, he estimates having “around 200 books at home.”

“It seemed obvious to dedicate what I’ve spent 13 years of my life doing, to her”

Since then, he has worked his way up through the ranks, becoming one of the many household names that inhabits Copenhagen’s cocktail scene. “It just became more and more interesting to stand behind the bar,” he says. At 1105 he stood shoulder to shoulder with Humberto Marques, owner of Curfew cocktail bar, and after a short gig as bar manager at 1656, he landed in a button-up shirt at Ruby. “I became humbler towards what I was doing,” says Nicklas. The change of clientele attached to, at the time, one of the world’s best bars, proved to be a challenge. “My pride as a bartender rose,” he admits. Yet, the experience also pushed him further in his personal development and to where he is today. Bacardi Legacy is not Nicklas’ first competition. However, at this year’s challenge the stakes are high. “La Luna”, as Nicklas’ entry cocktail is named, is not just a testimony to his knowledge and pride as a bartender. Named after his 19-month-old daughter, Luna, it is his Legacy in life, and ultimately, his role as a father that he is taking to the finals. “Even before I thought of the cocktail, I knew that I wanted to name it after her,” he says. The whole idea behind Bacardi Legacy stems from the Bacardi family and the legacy left behind through generations of rum making. “What I leave behind,” says Nicklas, “is my little daughter. I wanted to salute her and the gift of becoming a father to her,” he adds. “She is awfully wonderful. She has been to the bar with me a couple of times, and she loves the sound of the shaker. It seemed obvious to dedicate what I’ve spent 13 years of my life doing to her, and see how far I can get with the drink. She was born on 8th September, which is why I chose to work with Bacardi Ocho.” After winning the Nordic finals, Nicklas has sealed La Luna in a bottle, due to be given to his daughter upon her 18th birthday. “Maybe she is gonna hate it,” he says laughing. “But I wanted to give her that.” Juggling late hours and getting up early to play with his little girl hasn’t been easy for Nicklas. “I’ve found a balance between work life and fatherhood. But you give up on certain things, like the social outings after shift and industry events during the week. As a father, you can forget about that; and I honestly don’t mind,” he says.

Stiff legs and two hours of sleep before a play-date may sound excruciating to most. As for bartenders, it is a life-style you get accustomed to. “We bartenders are just a different breed,” says Nicklas. Should he go onto win the Legacy final, he is hoping it can serve to have bartending recognised as a trade within Danish society. “There are no union rules or requirements, you can’t get SU (student’s support) because it is not recognised by the government as a job, let alone an education,” he says. “Bartending is instant stress, and that’s something you face on a daily basis. We don’t get sick, because if you get sick, there is no pay. You come to work, have a shot of bitter, take a painkiller, cough a bit in the back, and push on.”

Nicklas’ colleagues describe him as hard-working, helpful and immensely dedicated to his trade. Yet, he admits that the Nordic final in Stockholm left him nervous, and that winning it had him baffled. “My feeling was this: now I’m gonna go on that stage and do what I do best, and if I don’t make it through, that’s it. There’s nothing to moan about.” When judges announced Nicklas’ name, it took him a while to react. “I don’t remember what I was thinking,” Nicklas recalls. “I was there having a drink with a guy from Sweden, and he suddenly said ‘hey, they are calling your name’, and I was just surprised.” In a sheer moment of joy and surprise, Nicklas rushed to the stage, lifted Danish judge and bartender Kirsten Holm from K-Bar off her feet and spun her around in a dance. Somehow, the 17-year-old aspiring DJ finally found his rhythm.

The next goal awaits in Amsterdam. With La Luna being an easy to replicate cocktail, Nicklas is hoping to make it through the semi-finals on 13th May. According to Kirsten Holm, he is “original, and stand a good chance at winning in Amsterdam.” If successful, this would leave him as one of 8 finalists out of a total of 42 contestants. If he wins, his cocktail will forever be engraved in the cocktail history books. La Luna; his legacy.

Show your support for Nicklas by stirring, snapping and tagging with #lalunalegacy whenever you make the La Luna recipe at home. Stay tuned on our Facebook and Instagram when we join Nicklas backstage 13th-16th May in Amsterdam. Until then, find out who else is shaking up the Copenhagen cocktails scene.