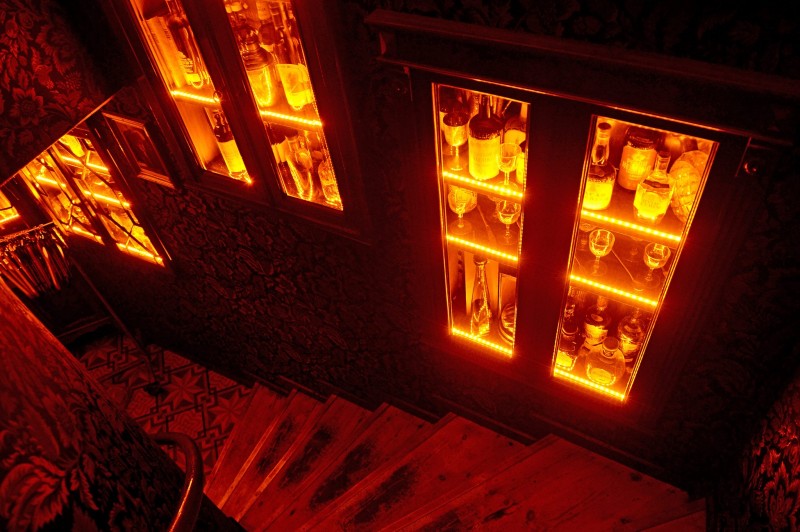 The cocktail crown jewel of Copenhagen

Ruby opened its doors in 2007 when Adeline and Rasmus Shepherd-Lomborg decided to settle in Copenhagen after a long period as nomads. Rasmus more or less stumbled upon the old office building, that is now Ruby, and found it perfect for a bar. At the time there were nine Michelin starred restaurants in Copenhagen but only very few cocktail bars, and so dealing with the banks to obtain a loan for such an entrepreneurial venture was not easy. After talking to 10 banks, Rasmus managed to convince a young bank clerk to finance the project. Like good people of the craft they invested most of the money in the actual bar and had to make do with lamps from IKEA and tables from Silvan for the opening night. That has changed. Significantly!

Today, Ruby is the cocktail crown jewel of Copenhagen. Having been featured on the select list of the World’s 50 Best Bars six times, Ruby is renowned way beyond the borders of Denmark.

Lamps from IKEA and the like have long been exchanged. The complex blue wallpaper is made from horsehairs, an old cabinet has been turned into a humidor for cigars and the bar is made of marble. Even the restrooms stand out with non stop Eddie Murphy standup in the loud speakers and soap so characteristic that the regulars buy it for christmas gifts. You can hang out, year round, in the covered courtyard while having cocktails served. In the basement bar, you literally enter an old safe! The safe now holds wall-to-wall glass cabinets full of rare bottles of vintage spirits. It’s a treasure chest available to the curious cocktail enthusiast.

The menu at Ruby is always based on quality spirits mixed with seasonal inspiration. The menu changes at least four times a year always covering all types of glasses and all major categories of alcohol. In the basement however, there is a separate menu focusing on “forgotten classics”. Here you’ll have the opportunity to taste amazing cocktails (almost) lost through time and for each one you’re encouraged to decide between two types of spirits according to your preference.

One of the biggest challenges for an internationally acclaimed bar like Ruby is of course to constantly stay on top of their game! Operations manager Nick Kobbernagel Hovind makes sure this happens. Professional discipline is an integral part of the bar and a lived value for the entire staff. Everyone contributes to keeping the bar at its best at all times – that’s the only way you can make it to the world’s 50 best on a continual basis. Due to its high standards over the years Ruby has hatched some of the best bartenders the Copenhagen has to offer.

The opening of Ruby is recognized by most bartenders in Copenhagen as being a mile stone within the industry; taking it to the next level. This is credited to the ambitions of the owners, Rasmus and Adeline, who came to Copenhagen with a completely different vision of what a bar could be like compared to the established industry. Through dedicated hard work they materialized this vision in Ruby. Their second venture, Lidkoeb rocketed through the cocktail stratosphere from day one and word has it that something new is coming up. With this track record we can’t wait to see what’s coming next!