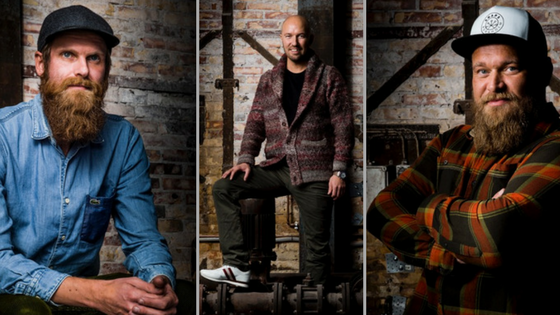 Organic schnapps for the new millennium

The Nordic kitchen has been roaring through the gastronomic landscape for the past ten years exploring new uses for local Scandinavian seasonal ingredients. This same quest seems to have been offset within the world of spirits and drinks where micro distilleries and creative bartenders are reconnecting us with our cultural roots by reinventing the tradition of snaps and aquavit. A recent player in this field is Snaps Bornholm who boldly launched no less than eight different labels last year and a booklet with 16 different recipes for drinks with snaps.

The three friends and founders of Snaps Bornholm John Oxlade, Jesper Rasmussen and Simon Jensen are determined to revolutionize the snaps market and bring snaps back on the agenda in people’s homes as well as in bars after what they perceive as many years of standstill within the industry.

“We started to make our own snaps as we didn’t feel that there was a snaps out there that hit the mark and that we would be proud to serve. We did so for quite a while with great success but quickly had the idea to produce own snaps from scratch and in greater quantity instead of just playing around for our own amusement. As the idea set root the ambition grew to revolutionize the snaps-market and bring the snaps back into people’s awareness.”

To make the dream a reality they consulted Niels Frost Jensen form Den Bornholmske Spritfabrik. Niels has been making snaps for 30 years and it didn’t take long for them to realize that their passion for snaps was on par and that a collaboration would be natural. It turned out to be a fruitful one as Niels contributed with his many years of experience within craft distilling and the three clover founding team of snaps Bornholm could play the role of the passionate idealists pushing a vision uninhibited by tradition and experience.

“We wanted to create a product with a clear flavor profile and without the unpleasant spirited aftertaste. We didn’t know the traditional limitations. We were told that we can’t do this and that. But we wanted to do it. Period. Armed with high ambitions and a good portion of naivety we stubbornly pushed a lot of barriers and ended up with a great product that we are really proud of.” The result of the collaboration was no less than eight different labels and they have been received well. Snaps Bornholm quickly had to scale the production from 500 to 20.000 bottles. Especially their fig snaps sold out surprisingly fast.

“People seem to have become more interested in quality and prefer less but good products. In general people appreciate that whatever is being put on the table is an expression of thoughtful care. In our busy lives, when we take the time to enjoy ourselves it better be good.”

For Snaps Bornhom the success on Denmark is only the beginning. The guys have hit the ground running and don’t intend to stop as long as there are people out there in need of good snaps. Next stop is Norway, Finland, Germany and Sweden.

“They love our chili snaps in Sweden and our snaps with buckthorn, dill and cucumber is ideal for cray fish parties. They seem very open to new things in Sweden – they are not conservative at all – when it comes to flavor they value quality over everything else.”

Well aware of the growing cocktail interest among food and drink enthusiasts Snaps Bornholm asked Jannick Gram and Andreas Firlings from Copenhagen Cocktail Academy to play around with their products to explore their use in cocktails in the contemporary bar. This resulted in an inspirational booklet with 16 different drinks – a cocktail and a long drink for each of the products from Snaps Bornholm. You can download the booklet here and read more about a selection of the cocktails and products in our feature on snaps-cocktails here.

A wiki-insight on Bornholm
The Danish island Bornholm in the Baltic Sea is ripe with entrepreneurship. It has its own professional network for entrepreneurs and special funding infrastructure for startups and small business. Within the past decade it’s been the cradle for some of the most successful Danish food entrepreneurs such as Johan Bülow (the king og Licorice) and Gorm Wisweh (the king of gourmet pizza) and now the passionate snaps producers from Snaps Bornholm. The main industries on the island has traditionally been fishing, dairy farming, and arts and crafts such as pottery and glass production. Bornholm is commonly referred to as The Sunshine Island because of the weather or The Rock Island because of its geology.