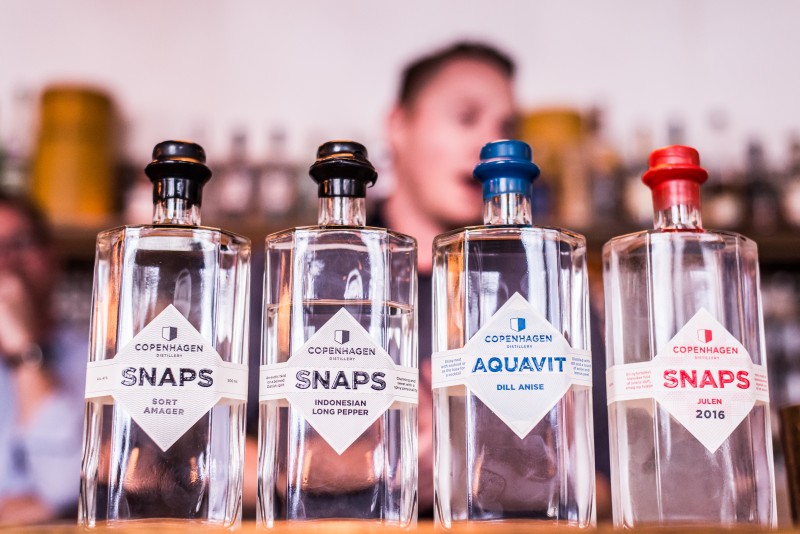 The future of snaps and aquavit

What is the future for our local spirit? This question was raised this week at the first “snaps summit” in Copenhagen organized by the local industry network Copenhagen Cocktail Club at Lidkoeb. Three producers were invited to take part in a discussion moderated by Sune Urth from No.2. Participating was Lars Kragelund Jensen from the Norwegian brandy producing company Arcus, Henrik Brinks from Copenhagen Distillery and Dan Schumacher from Schumachers. Nick Kobbernagel Hovind from Ruby and Kasper Riewe Henriksen from Duck and Cover provided aquavit cocktails for the event. We were lucky to catch bartender Ted Dako after the event and have him fill us in on insights from the event: So Ted; what was the “snapse summit” all about?
The summit was a get together of people from the bar industry and producers of aquavit and snaps. Aalborg akvavait (Arcus), Copenhagen Distillery and Scumachers snaps were all there to share the vision of their brands. Sune Urth was the moderator of the event, making sure to start a discussion between producers and bartenders.

Most People perceive aquavit and snaps as being the same thing. Do you think it is important to distinguish between the two and if so why?
Well, let’s start to with the definitions. Aquavit is a distillate of caraway seeds or dill with an alcohol percentage above 37,5 %. You are allowed to add other flavors as long as the caraway and/or dill seeds are the most profound flavors. Snaps is just a flavored spirit, it can be distilled, infused etc.

So all aquavit is a snaps. But not all snaps is aquavit. So gin, spiced rum and Campari is also snaps from this perspective.

In Scandinavia, we pretty much see snaps and aquavit as the same thing. So the importance of distinguishing between them is not that big. However, if we want to export aquavit, it is of great importance to distinguish between the two. If you want to sell aquavit in Germany for example, you cannot call it snaps because then they will compare it to peach or peppermint schnapps. So then the aquavit will fall in the wrong category and will not get the fame and glory that it deserves.

What makes snaps and aquavit unique and interesting compared to other spirits in your opinion?
To me it is just as versatile and complex as any other mixing spirit like gin, rum, tequila or whisky. The cool thing about it is that it is indigenous to the Nordics. We have made it here for centuries and it is made from locally available ingredients like caraway and dill seeds. To me it is amazing to taste how distilled caraway seed can bring flavor notes as lemon, orange, anise and even elderflower. It is a true Nordic spirit.

Where do you think aquavit and snaps is heading in the Contemporary Scandinavian bar?
Some bars have been using it for ages, but more and more bars are starting to pick up on the trend. I think a lot of Danes are afraid of trying aquavit in cocktails, as the general idea of how to drink it is; cold as a shot during Easter and Christmas – until you get shit faced. But I see more and more bartenders using it in cocktails now, and it makes me happy. I think that it is going to be widely used in contemporary cocktail bars around Denmark in the coming years as it is versatile. It has a unique flavor profile that suit cocktails and it is our unique Nordic spirit. Nordic Mule from We got Spirit

How would you suggest that People approach aquavit and snaps when mixing drinks?
I know that it is not correct to say, but aquavit behaves kind of like gin. So I would suggest starting to use aquavit like a gin. Try it with tonic, try it in a sour, try it in a Martinez. When you have tried that, get creative. At We got Spirit, we have paired aquavit with everything from elderflower to mezcal and it works – for instance in our cocktail Nordic Mule which is featured on your blog! If you are intrigued by the use of aquavit in cocktails download our free ebook on aquavit with 15 different cocktail recipes from some of the best cocktail bars in Copenhagen.