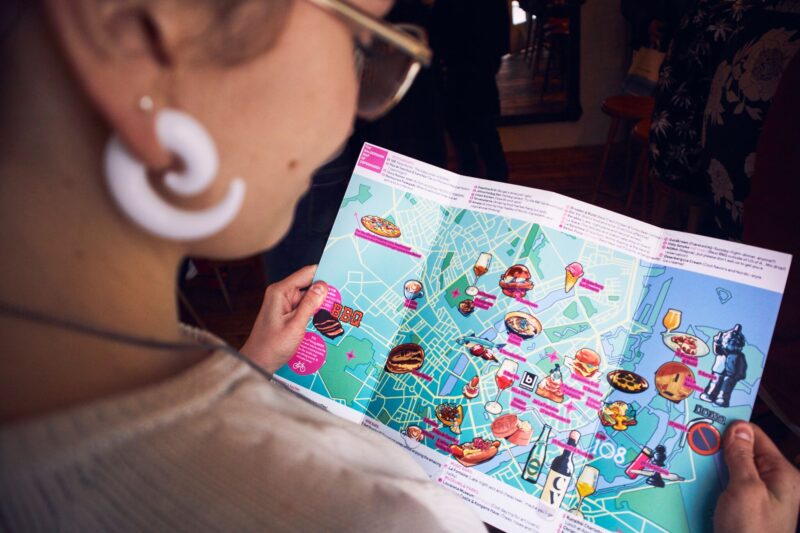 The new all-inclusive menu from Balderdash

Tastebud teasers from around the globe

“You want to try the pizza mist?” says Geoffrey with a big, childish grin on his face. Disregarding a response, he reaches for a small spray bottle bearing a likeness to that of a drug store travel kit. One, two, 15 sprays burst out into the small basement space of the bar, fogging up the air. Seconds later, notes of sweet tomato passata and Italian herbs enter our nostrils. Indeed, it’s pizza. Mamma mia.

There is one motto, which seems to perfectly reflect the mad creativeness at Balderdash. From cheese puffs distillates to chicken skin infusions, the idea is pretty simple: if you can eat it, you can drink it. Or, in the words of owner and bar manager Geoffrey Canilao himself, “nothing is off limits.”

Staying true to the idea of pushing creativity, whilst “just having fun”, this season’s menu seems to have pushed the blurred border between food and drinks even further.

While trying to head in a new direction, the focus on Nordic flavours has been replaced with a more diverse and international palate. Drinks like the Baklava Martini, Midori Slush-puppy and Hot Chicken Old Fashioned both accompany and challenge one another in a vast mix of flavours and creations. Made by using a method called fat-washing. A simple yet effective way of adding flavours to alcohol.

Stir and strain over ice, garnish with a house-made pickle.

And it is not just your tastebuds Balderdash is out to tingle. Whether picked up at the counter or handed to you by the staff, the new menu is a jaw-dropper. The beautiful illustration by Sofie Kampmark of a nude femme fatale with a drink in one hand and a knife in the other jumps at you in full gloss. The creativity continues on the inside, showcasing illustrations side by side with the various concoctions of the season. As the summer in Copenhagen, the choice of colour is vibrant. The aim of the menu is to leave something that resonates with the multitude in Copenhagen. As Geoffrey puts it, “at the end of the day you want a diverse menu; because our clientele here at Balderdash is and has always been diverse.”

Although most flavour combinations and initial ideas have been chosen by Geoffrey, this season’s menu has been built with a clear theme in mind: inclusiveness. “We had the whole team do research and development,” Geoffrey explains. “I try to pin a direction, then the guys follow and do the research.” Each staff member has had to familiarize themselves with the food and culture in question, and then come up with ways to replicate it in a drink. “We’d all go shopping together,” explains bartender Tatjana Bay, “sometimes spending hours in various Asian shops in Copenhagen.”. Some flavours, like the honey and nuts found in traditional baklava, are rather easy to come by. Others, a bit harder to replicate.

The perhaps most mind-boggling one came to Geoffrey on his last trip to Japan. “I ended up in a Japanese convenience store,” he recalls, “and there was a chocolate-covered potato chip.” Bamboozled by the flavour and texture combination, he gave his team the task of recreating it all in a cocktail. “When you are trying to recreate something,” says Geoffrey, “it is about finding the thing that makes you know why it works.” With help from the in-house rotovap and after 36 hours of maceration, the Potato Chip & Chocolate Martini was born. Balderdash’s experimentalism may spook some, but the message behind the new menu is clear. “We wanted it to be much more personal and share our experience with our customers,” says Geoffrey. Besides recreating their favourite snacks and meals, Balderdash decided to turn the back of the menu into a personalised Copenhagen city map, pinpointing everything from great beers and late-night noodles to the best hungover pizza in Copenhagen. But before you try stealing it and sneak it past the bartender, get this: the menu is in fact for sale. “We called the menu Love Hurts, because everything we love about Copenhagen also hurts a little. We think it is a cool menu, we don’t want people to steal it, we want them to buy it.” For each 50 DKK menu sold, 28 DKK will go to support Alzheimerforeningen, a Danish charity that works to help people and loved ones affected by dementia. “To us, it’s all about collaborating with your local network and friends, from natural wines to illustrative art and charities,” says Geoffrey. “Because we are a community here.”

When it comes down to it, sharing is caring – so head on down to Balderdash, check it out and share your moment with us on Instagram or Facebook. And if you are into discovering more spring menus around town, don’t skip on the new range of delicacies at Ruby. Photos by our talented Dennis Larsen and Alexandru Barbu.