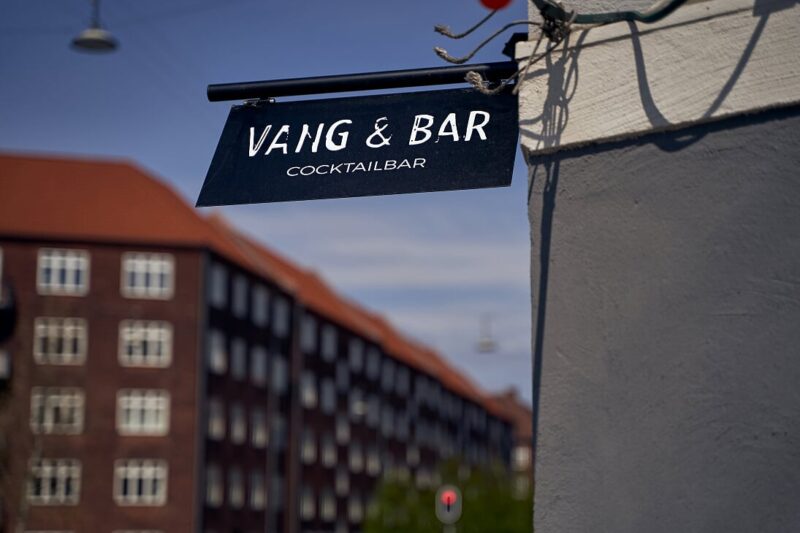 Vang & Bar: you choose the vibe

Putting the experience in the hands of the guests.

Once you set your eyes on the prize, it’s really hard to get excited by something else. Emil Vang had the same feeling about a charming inn at Ingerslevsgade 200. It used to be a bodega, where he began developing an interest in drinks. And just as many other bartenders realize during their careers, the winds are always blowing in the direction of home. Thus, Emil made it his mission to reclaim the space as his own.

Taking over what used to be The Rusty Jigger wasn’t a short process but after eight months of negotiation, the deal was reached. With the help of many friends and connections, Emil’s dreams of Vang & Bar started to materialise. To understand what those dreams are made of, Emil took us on a small journey through his life and inspirations. “I was raised on a farm on Møn, an island east of Sjælland, where my mom runs an organic farm. In fact, she used to supply Meyer, and so naturally, I always wanted to be a chef. But the culinary school in Nykobing Falster didn’t really align with what I was seeing the Noma guys doing, and so I quit. Besides that, I was also on the Danish National Skiing Team, travelled a lot and through a couple of stints at après ski-bars and volunteering at festivals I met Peter Altenburg from GILT. He explained to me that being a bartender and a chef is not all that different, so I started working with him, eventually joining GILT in 2012. A year later, I joined the guys at Holmens Kanal. I was the youngest, but I used that to my advantage and worked alongside many of my greatest mentors – Viktor Hägglund, Roy Atarodi and Harry Bell. As time went by I moved through a couple of other bars and did a lot of catering as well. But I always knew that if I want to be in bartending long-term, and also remain sane, I needed to get my own place.”

In many ways, Emil’s life led up to taking over this venue. The connections he made via catering and doing events, helped him obtain colourful designer items to aid the atmosphere of the space. Through his wife, he received tips and help on interior design. And with a little help from his friends around the bar scene, he managed to customise the interior seating area to fit with the vibe of a cocktail bar. Upon entering the venue, the thing that strikes you is the geometric layout dividing the space into small blocks and corners. Vang & Bar cleverly separates the room so it can fit different kinds of people. “We wanted to build a space where you can have a birthday party and while having loads of fun, not ruin the evening for other guests.” In this way, the ambience is rarely off balance and you get to set your own tone when you get a table.

As is standard, the bar runs table service, which helps the team connect with the guests and make them feel that they are in the main focus of the bar. Providing personalised service at a high level is at the heart of Emil’s focus. And that is something you notice in the details. The bartenders will try to personally seat you into the best spot and swiftly accommodate your taste buds. And while the bar isn’t trying to shove it craftmanship down your throat, you will inevitably notice the absence of pour spouts and the constant use of Mexican elbows for always freshly squeezed citrus juice.

The bartenders also acknowledge that not everybody knows what they are going to drink upon entering the bar. And for those who don’t want to be bothered by this question at all exists Vang & Bar’s 3 piece cocktail menu, during which you get served three drinks based on the bartender’s recommendation. Our session began with Absence Spring – a refreshing highball highlighting the main ingredient, fermented quince chutney. As crazy as it might sound, each ingredient adds something to the funky complexity of the chutney, resulting in a savoury and delicious cocktail. The rye whiskey adds a familiar spiciness, while the Yellow Chartreuse marries the flavour profile through the light taste of pears and spices. Quince is a tricky ingredient to work with but fermentation adds an inherent sweetness and the cocktail develops curious fruit flavours, ones you might encounter while drinking a Jamaican rum.

After we got our tastebuds going, the main course was served. The most traditional of them all, but as usual, with a twist – an Old Fashioned on cocoa-infused bourbon. The Well-dressed Gentleman looks innocent and casual at first but from the first sniff, it’s like a trip to a parallel dimension. The smell of chocolate is all over the glass and it’s enchanting. All the sweet cocoa flavours remind you of chocolate milk and the expressed orange peel adds a citric element that carries the smell across your nose. As you take the first sip, you are immediately greeted by a gentle kick of a very round bourbon but the chocolate is soon to return. The cocoa notes act like a soft blanket wrapped around the powerful whiskey and even though the last drops of taste have a lot of orange to it, the chocolate has a very long finish on the palate. As for the final piece of the tasting puzzle, we navigated Emil towards a dessert cocktail. Perhaps the Well-dressed Gentleman got us on a sweet note and Emil immediately used that to serve us a Tiramisu Flip. What initially started as a drink called Tear Up My Suit transitioned into a relatable metaphor playing on the combination of dark rum, amaretto and coffee liqueurs, cold brew coffee and egg yolks. A dense body allows all the sweet, almond and coffee flavours to bounce around and excite you. For us, it was the perfect last sip as we finished our tasting and left us wanting more. Vang & Bar is new, young and ambitious. And in many ways, due to its location and venue, slightly leaning on the edge of the cocktail industry. Yet, with its focus on tailoring the customer experience and a deeply rooted focus on quality produce, it shouldn’t take long to move the crowd in their direction.

With summer knocking on our doors, it’s time to sip your drinks outside. Pay a visit to the glorious yard of Lidkoeb, enjoy the everyday rush at Rantzausgade at GILT, or get a dram and a pint with Gensyn. Photos by Alexandru Barbu, check out his work!