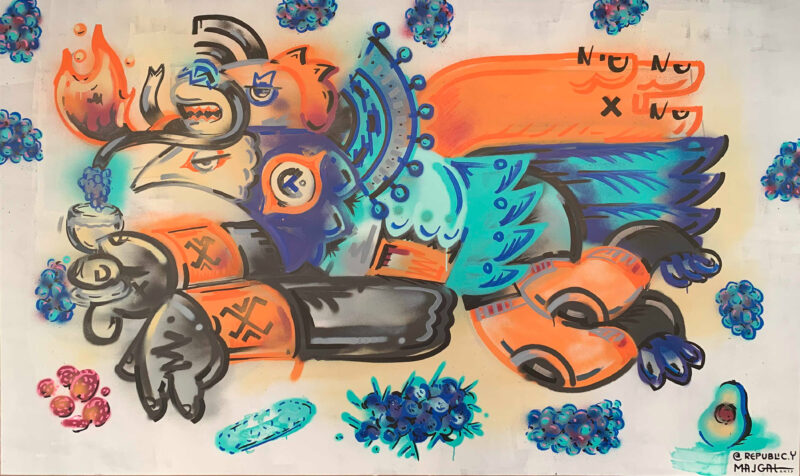 It is Saturday night at Kester Thomas. With a spray can in his hand, Dawid approaches the wall. A few hisses break through the BGM, and leave a stain of colour on the pearly white canvas. The first couple of guests sit back and relax, overlooking the process. Slowly, on the blank canvas in front of them, the conceptualisation of the very cocktail they are drinking emerges; brought to life by the expressive power of art.

Now, more than ever before, bartenders in Denmark are fighting to have bartending be recognised as a profession rather than “just a job” – A step in the process is making people acknowledge the range of skills and attention to detail that goes into making a cocktail.

Until now, bartenders have been following in the path set by chefs as a guide to making that happen. It makes sense, seeing as our creations are also meant for consumption. But perhaps it is time to rethink what consumption can mean and look beyond the hospitality industry.

On this particular night, champagne and cocktail bar Kester Thomas has made an effort to do so. Spray paint cans stand in a cluster, newspapers are taped across the floor and ceiling in one corner, and a giant, white canvas rests with black trash bags against the main wall. It screams chaos and disorder. Yet, the vibe is calm, and the bar is open for business as usual. Dawid Majgat from Poland and Guido Boelman from Holland are the expressive and creative duo behind this night’s bar takeover. But instead of serving drinks behind the bar, they provide guests with visual elements to consume right in the middle of the floor.

Republic.￥, as they call themselves, is an experimental concept that brings live-painting and cocktail creativity together through interactivity and shared experience. Essentially, it is Dawid’s platform for artistic expression, and Guido’s magic portal connecting his bartending background with his love and passion for art. Yet, more than that, it is a concept. “An independent post-colonial country,” says Dawid with a slight smile – a fantasy dreamland inhabited by complex human nature in monster’s skin, inspired by friends and encounters. One or more monsters always appear in the artworks. “They are symbolic icons,” explains Dawid, “people that mean something to us.” The monster Primus, for example, is based on a friend of those who were always late. Ironically, in Republic.￥ he owns his own airline company. Much like artists, bartenders also put their life experiences and creative knowledge into creating a piece that can be “consumed.” To some, this is known as “mixology”. A term which, according to Merriam-Webster, as far back as 1948 has meant “the art or skill of preparing mixed drinks.”

As Guido puts it, when making art “it is the same creativity as that which goes into cocktails.” As such, it was important for him that the art of Republic.￥ remained connected with bartending. Guido first discovered Dawid at an art fair in Poland and was immediately impressed. However, after years of setting up exhibitions and showcasing at galleries in Poland, Dawid’s creative energy wore out. “I wanted to travel,” says Dawid. And so they did.

Their first challenge was to find a canvas. “We started contacting bars in London,” says Guido. But after more than 260 emails, only one replied. After London, the duo journeyed to Israel, but once again the responses were few. Yet, the Holy Land gave them the spark they needed to light a blaze. “Once people saw us work, we immediately got invited to Amsterdam,” says Guido. Quite rapidly, the network and collaborations began to grow, landing them gigs such as designing the Don Papa Rum mural at Hooch & Brew in Hague. Since then, the two have painted for several bars and restaurants around the world, from The Artesian in London to Michelin-star restaurant Mi Tocaya in Chicago.

Despite mixing with famous names, including Jared Leto of 30 Seconds, Dawid and Guido still keep it real. “We want to stay connected with cocktail bars,“ Guido explains. Erwan Le Bonniec from Kester Thomas had seen the guys painting at Two Schmucks in Barcelona before. And so, when they contacted him to ask if he was up for hosting their first visit to Copenhagen, he didn’t hesitate. “I believe that art and cocktails are related especially in regard to creativity and providing guests with an experience,” says Erwan, admitting that his own gateway into the creative environment came as a graffiti artist in Paris 20 years ago. “I think it’s important to offer events where different types of creative people can express themselves,” he adds.

For this special event, Kester Thomas presented a diverse menu focusing solely on pisco. The Ceviche Sour, a long-time favourite of ours, is the main protagonist of the night. As awaiting guest take their first sip, they remain unaware of the sensory display about to evolve before their eyes. The painting always starts abstractly. With an MA in fine arts and years of developing his style, Dawid knows what he is doing. Spray cans have been replaced by a brush, but the strokes are equally gracious and defined. The colour palette starts in blue and green tones before splashes of orange are added. Building layer upon layer, slowly adding elements, until the final piece comes together at the very end. A mythical creature from the Inca Empire floats horizontally with a Ceviche Sour secured in its hand, true to pisco’s native Peru. Clusters of grapes, the main focus of everything at Kester Thomas, are scattered around. And finally, at the bottom right corner sits a single avocado with Dawid’s signature beneath. Republic. ￥ use water-based paints, allowing them to stay inside even the smallest of bars. The result is an incredibly humble and intimate experience, which allows guests to consume art with all senses – whether by gazing at Dawid’s artwork or via nosing and tasting Kester Thomas’s cocktails. “The bar is a social place,” says Dawid. “We don’t want to be in a gallery, we want to be where people are and get the immediate response.”

And for now, this is where you will find them. Surrounded by great artists alike, creating in the sacred matrimony between art and cocktails.

If you also believe that cocktails are art, you might get along with the folks at Balderdash. Their spring menu is filled with mind-blowing creations you shouldn’t miss out on. Do you have your favourite spot where the cocktails remind you of an art piece? Let us know on Facebook or Instagram.